Why not to share your company name can be important for marketing your products and company when any and everyone has access to google. In today’s training Ray talks about when it’s the right and wrong time to mention your network marketing products name and the company name. 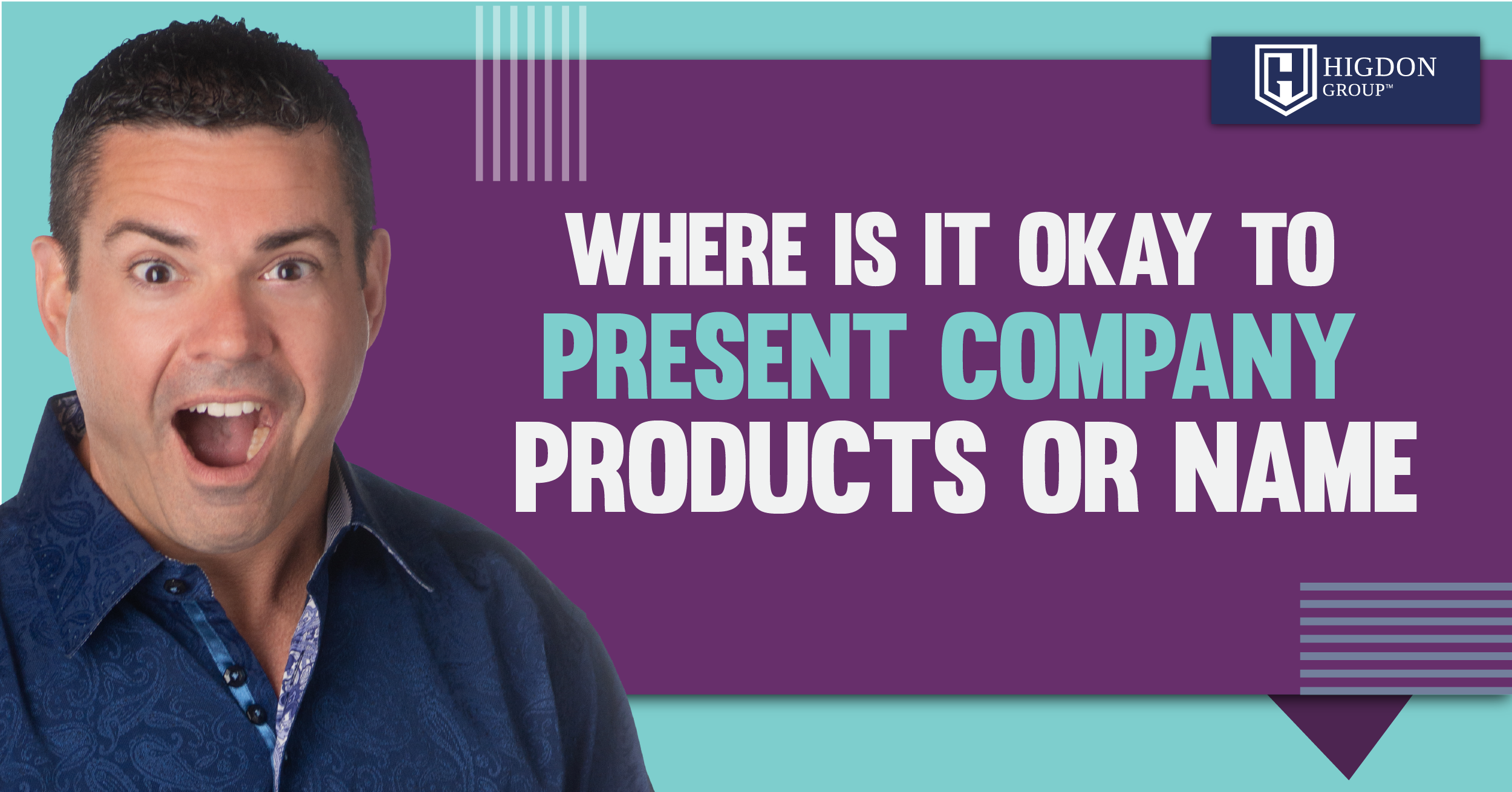 Where Is It Okay To Present Company Products Or Name

Carrie: Thank you all for that. My question is revolving around something that my company is doing this weekend, actually starting today and tomorrow, that has me a little puzzled. So we’re doing a relaunch, which is super exciting, everything. There’s the new product line coming out and it’s a big deal.

Although the company is providing us with our content to use, to post every couple hours or so on our social media. And I took a peek at all of the content and every piece of it has the company name, in and throughout the post, the images, everything. And I know that that is not a good thing to do because it allows people to do their own research and things like that.

So I just wanted to get your take on that as far as how you feel that I should go about kind of maybe restructuring this in a way that still works for letting people know that there is a relaunch and to be super excited, but without really giving away too much information about the company?

Ray Higdon: Yeah. Very, very common occurrence for sure. I mean, so before we talk about that content and those company assets, the question I would have is what’s in it for the consumer? When you say relaunch, is it new flavors, is it discounts? What is it?

Carrie: Well, there is a new product line altogether. So there will be a line of new products, and I actually don’t even have that information yet. So it’s basically to let the world know that the company exists and here we are, these are all of the benefits of the company and what it has to offer currently. And then it will be an official launch of a new product line and announcing what that is. And we don’t even know, as business owners yet, what that is.

Ray Higdon: Okay. There’s several things I can share with you on this. It sounds like you know some of these things already, but I’ll make some distinctions. So first of all, if we break things down to what we post on our timeline or newsfeed on Facebook, on Instagram, I’m not talking stories, I’ll get to that in a second, but if we look at what we post just on our personal profiles, feeds, timeline, et cetera, that is just not the place to name the company.

If you’re a company over 200 million a year, I guarantee you there’s some hatred out there. There’s some negativity out there, which that’s what floats to the top of the Google search. When people see you marketing with the company name in those particular areas, they’re either turned off and like, “Oh, God, they’re spamming me,” or they’re interested and they do their own independent research.

They go to Amazon, eBay, and Google, and they determined that they can get something cheaper, or that it’s negative, or that it kills puppies. They’ll just find things you don’t want them to find, or they find a clever internet marketer that has a good funnel that it sucks them in and you are never the wiser.

Where should you use the company stuff? So where I think it’s fine to use it is in your stories and that’s if it’s compelling. I mean, if it’s just, “Hey, stay tuned,” that may or may not be effective. It’s like what’s in it for them? So everyone’s walking around thinking, “What’s in it for me? Why should I pay attention to this?” And so if there’s nothing there, nothing of benefit of, “Hey, here’s why you should be excited,” then it’s just not going to work for people not in your company. And that is a distinction because the things that you should be saying to your team can be worded very differently than how you should say to prospects.

People in your team are probably fired up. They’re like, “Yeah, man, I love the logo. I love the name of the company.” But people that aren’t, just aren’t. Right? Now in stories, I think it’s fine. I would still look at, are they persuasive? Are they benefitdriven? Does that make sense? I wouldn’t overload my stories with pounding the company name.

Where you can pound the company name and I never see any companies suggest this, but it’s actually the most effective place is YouTube. And so why YouTube? Because the majority of people that don’t understand marketing, will just talk about the company name all day long, right? All day long, “I love Grapeity Grape.” And so they’re turning off most people, but some people actually do their independent research and say, “I wonder what Grapeity Grape is?” And so they go online, they search.

Until I know something new benefit-wise, I don’t know how much I’m marketing that personally because there’s just no reason. If you think about the brain of a marketer, right? So let me give you an example. So the largest product launch we did as a company was a course called The Three Minute Expert. The Three Minute Expert is my blogging course. And when we offered that in 10 days, it did close to $1 million in sales.

Before we launched that, I didn’t go around saying, “Hey, something’s coming. Something’s awesome coming. Something’s coming.” But I did do a massive lead generation campaign. So I actually did a… I forget what it was called now, but I did… Oh, what was it called? I can’t remember what it was called. But it was something like a marketing summit or something. I had Russell Brunson, Jonathan Budd, Mark Hoverson. I had just some really, really savvy internet marketers.

So I do this free summit to generate a ton of leads. I mean, it generated 40,000 leads. And then I did the launch. The reason I share those details with you is if I know something’s coming, then I want to up my leads, not turn them down.

By marketing the name of the company, you’re turning leads down because you’ve already told them. Why do they need to opt in to anything? Why do they need to reach out to you? They already know what to look for. Right? And so instead, I would think about who’s my target market? Who’s my target person? And what are they looking for? So without naming the company, can you tell me just a gist of what your company currently does because we don’t know what the new product does?

Carrie: Right. It is in the wellness field. So there are different product lines based on different–

Carrie: It solves the problem with multiple things actually, sleep, pain, anxiety, and all those kinds of things.

Ray Higdon: Perfect. So if I know that there’s a new product coming, instead of pounding the company name, that’s of absolute no benefit. People don’t care what the company name is unless they’re already in the company, which is not who you’re trying to attract. And so instead of that, I would do a one, two punch. I would alternate days and I would go to Google and I find 10 tips on sleeping better, and I would find 10 tips to reduce stress. And so I would alternate days.

Then I would do the exact same thing about reducing anxiety. And so when they reach out to me, I’m putting them in a little list to make sure that I follow up with them. I send them the 10 tips or whatever, and I ask them, “Hey, what have you tried so far to help with stress, or help with sleeping?” Or whatever. Open up a conversation. So I’m going to go into massive lead generation mode, not massive pound the name of my company mode. So that would be the difference. Does that make sense?

Carrie: Yeah, absolutely. Thank you so much.

Ray Higdon: Yeah, you’re welcome. And just know the difference. The difference is in… I remember I just spoke for, I mean, I guess they consider themselves a kind of cosmetics company. I just spoke for a cosmetics company maybe three weeks ago. The owner is onstage and the owner says, “And I want to let you know that we’re unveiling a new product.” And the crowd is like, “Yeah.” And okay, yeah, that’s how people in the company respond.

It’s not how people outside the company respond. They’re like, “Oh, yeah. Great. Good for you. What’s in it for me? How’s this going to help me?” And so just always remember that. The language you use to speak to your team and get them fired up is very different from a prospect that has no idea what you do, no idea what the company brand is, et cetera. So I hope that helps, Carrie.

Carrie: Absolutely. Thank you so much.