Let’s Talk About Why Consistency Matters 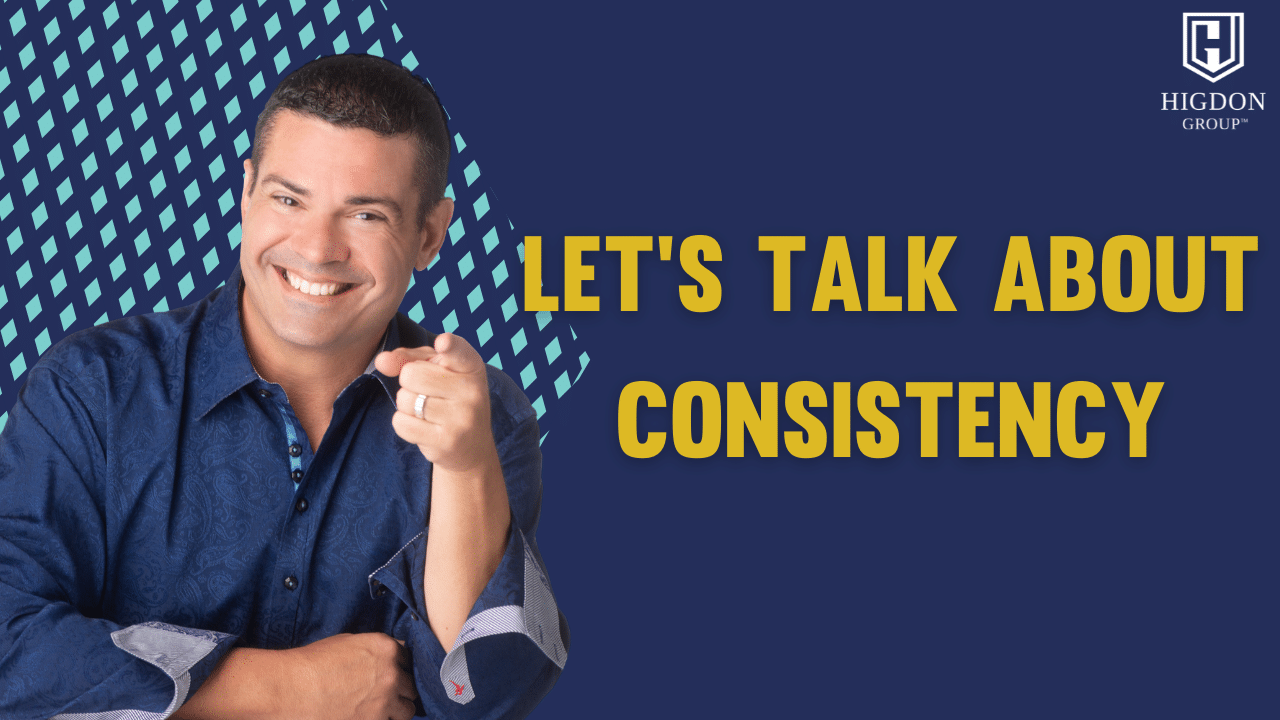 Ray Higdon: Consistency, let’s talk about that. So if you’re new and you don’t know, first time seeing some of my stuff, I am kind of known for that. I’m known for being consistent. I’ve done at least one video a day, every day, since July 15th of 2009, because I’m a lunatic. So over 11 years, I’ve never missed a day. And let’s talk about that. Why? Why am I consistent? Why do some struggle with consistency?

So why am I consistent? Because I draw the conclusion that each day may be the day that my content hits someone that completely changes their life, and I draw a massive priority to that, but I also draw massive significance to that. So everything that I do, and I’m maybe one of the few that’ll clue you in on this, everything I do is selfish. Literally, everything I do is selfish. I do it because it makes me feel good. So it makes me feel good to see people have breakthroughs, to have people send me thank yous. So I’ve incorporated that way of thinking of what makes me feel good, what makes me feel significant, and honestly, this is a healthy coping mechanism that I created from my childhood of not having a voice, of not being able to have an opinion.

I mean, if someone asked me if I was hungry and I said I was hungry, I’d get smacked, because I wasn’t allowed to have an opinion. I wasn’t allowed to have a voice. I wasn’t allowed to speak out ever. And so the coping mechanism is that I got really good at what I do. And I draw the conclusion that I have to show up to help people, and that’s what makes me feel significant, like what I’m doing is worthy of doing. And so that’s what consistency looks like. Consistency looks like you do it whether you feel like it or not, and you’re drawing the right conclusions to why you’re consistent.

And so I’ll share a quick story. I don’t know if this person’s on here. I don’t name the person. But a week ago, I did a quick 10 minute coaching call with someone who I think is awesome, and she shared with me that for four years, she’s been trying to build her business, and it’ll go up and it will come down, and it’ll go up and it’ll come down. It’ll go up, and then it’ll come down. And so she said a word that triggered me to throw what I would call a poke. And so she threw a word of, you know, I just don’t want to disappoint people. And so usually people that are so worried about disappointing others was disappointed in their past. And so they look at who disappointed them so greatly, and they vow never to become that thing.

And so I poked her. And sometimes a poke is accurate. Sometimes it’s a near miss. Sometimes it’s dead on. I threw the poke, and the poke was, who disappointed you as a kid? Now here she thought she was going to talk about daily routines and checklists, and here’s how to prospect people, because everyone wants information. What they don’t understand is it’s emotion. If you have an emotional issue, I can shove information down your throat all day long, you still ain’t going to do the work. You ain’t going to do it. Or you’ll do it for a little bit and then you’ll stop again, because that’s the pattern.

And so I asked her, I said, “Who disappointed you as a child?” And she said, “Well, I don’t know that it’s disappointment, but maybe shame.” I’m like, okay. So see what I mean by a poke? A poke is, let me, we don’t got time to mess around, let’s get to the root of the problem as quickly as possible. So I throw a poke, which sometimes lands immediately and like, oh my God, yes, exactly. Or sometimes it gets me there. It just gets me there faster.

And so she says, “Well, maybe it’s shame.” And she proceeds to share with me that her mom was a prostitute, and share with me some other things. But for this story, that’s the only pertinent fact. And I said, “Got it. Okay.” And I said, “I’m just curious,” because I know that this person builds on social media. And so I start seeing a possible path, but I need to confirm some things. So I ask her, I say, “I’m just curious. Do locals and family and friend, do they know this? Do they know that your mom went through that and did that?”

And she said, “Yeah, they all know. Friends, family, locals, they all know the story.” And I said, “Okay.” And then she volunteered something that sealed the deal, that made me understand exactly what was going on. And she said, “And my mother’s still alive.” Got it. And so I said, “The reason you’re sabotaging your success is because you believe if you have too much success, that those local yokels, friends and family, will start posting online how yeah, you’re successful, but your mom was a prostitute, and that would bring shame to your mom, wouldn’t it?” And she started crying.

And I said, “And you would do anything in the world to not bring shame to mama, wouldn’t you?” She said, “Absolutely.” And so now we’re at the root of the problem, but how do we fix it? And so I said, “There’s another way to look at this. Your mom literally did everything to try to give you a better life than she had. And for that to be the reason that you don’t succeed, that you don’t reach your potential, it’s a real slap in the face. If you create success, if you go out and reach your highest potential and impact people all over the world, then it will have been worth what she went through.”

And so she’s crying, and it really impacted her. And we got to the problem. And she texted me a couple days later of how she had a conversation with her mom, and she’s going to blow this mother up. And so consistency, when you’re lacking consistency, do you see how in her situation, like almost every situation I’ve ever really coached, is a protection mechanism. Let me protect mama from more shame. Let me protect me from feeling bad because mama is being shamed. I mean, you’ll kill people for that, right? You think someone will stop being consistent. Oh, it’ll [inaudible] extreme. And she might cap somebody to prevent that kind of shame because she doesn’t want to feel that. And what she just needed to realize is that the mom did it for her.

And so, so often people are seeking more information or strategies or tips or nuggets or tactics or concepts or hashtags, or what’s the latest, greatest whatever, right? AI, recruiting, automation bullshit. And what they really need is to understand that because that person abandoned them earlier in life, they have this theme that’s showing up as a business problem. And so if you’re not consistent, you’re drawing the wrong conclusions. That’s it, that’s all it is. You’re drawing the wrong conclusions.

You’re either not understanding that with consistency, you can make a big impact on this planet, you can help more people, you can feel better about yourself, you can create self-worth where there was none, or you’re just protecting yourself. Maybe, here’s a real common one, and in fact in our book we talk about this, but here’s another common one. It’s just a protection mechanism.

If you saw, and we share a story about this in our Time, Money, Freedom book, but if you saw one of your family members make a bunch of money, whether they won the lotto or built a business or whatever, and they lost it all, so if you saw someone close to you, a parent, an aunt, uncle, brother, whatever, if you saw someone make a bunch of money and lose it, or even if you did this, if you made a bunch of money and lost it, and you were ridiculed and you were made fun of, or that family member was made fun of, guess what you’ll do to protect yourself? You’ll protect yourself from making a lot of money, because your subconscious will draw the conclusion of, well, people that make a lot of money end up losing it eventually, end up being made fun of, end up being ridiculed, and I don’t want that crap in my life.

So you’ll never consciously say this. No one says, “I do not want to make a lot of money because I might lose it like Uncle Earl and then I’ll feel stupid.” No one ever consciously says that, but in their actions, they will stop showing up, or they’ll start having success in a network marketing company, and right as they’re about to cross into diamond land or crown diamond or whatever, something will happen. The CEO will piss them off, someone will misspell their name, and they’ll be offended and they’ll go somewhere else and start over, because there’s a ceiling where if I reach this ceiling right here, whatever that is, and for some people that’s 50,000 a year, some people it’s 50,000 a day, right? It varies. The temperature of your ceiling varies.