There are many ways to improve business performance, but one important way is to have posture and how to present yourself to a potential prospect. 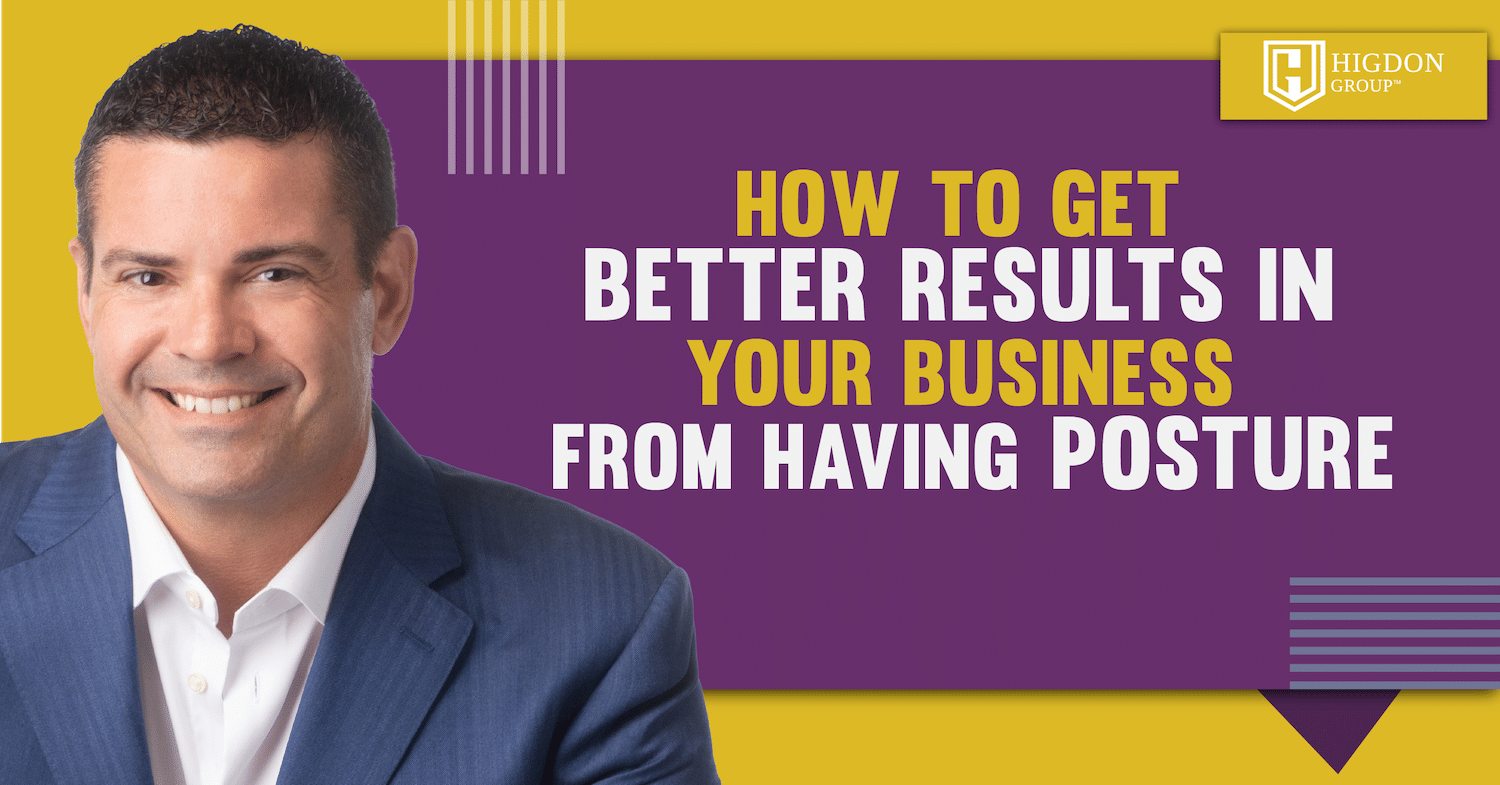 How To Get Better Results In Your Business From Having Posture

Cassandra: When you were prospecting and you say, “Are you open to learning about my business?” And they ask, “What is the business?” That’s question number one: what do you respond to that? And then they say, “Yeah, I’m open to it.” And so then you say, “Okay, great. I have a video that explains it better than I can. How soon could you watch it?” And they say, “I’ll let you know when I watch it.”

Ray Higdon: Yeah. First, I don’t know if you’re paraphrasing or if you’re saying it directly but I would never ask someone, “Are you open to learning about my business?” Because I’m going to assume no one gives a shit about my business. They care how it may help them, right? And so I might say, “Hey, I help people.” Are you leading with a product or money?

Ray Higdon: Business. Okay. She didn’t want to say money. Do you have money resistance?

Cassandra: No. I’m leading with money then, yes.

Ray Higdon: All right. I’ll back off here.

Cassandra: I guess I do

Cassandra: … have resistance to money.

Ray Higdon: Say anything but money. Business. And so I might ask, “Hey, I help people make extra money on social media. Is that something you’d like to learn more about?” And if they say, “Yes.” I’ll say cool. I’ll say all the rest of what you said but I won’t say my business because no one cares. No one cares about my business. They care what’s in it for me. How’s this going to help me? And if you walk around the world and you nonjudgmentally understand that everyone is selfishly out for themselves, and you do that in a nonjudgmental way, you will be a great marketer. If I just assume that you don’t care about my relationship with someone you don’t know, unless I can translate it in a manner that could help you, then I’m going to be a better marketer.

But most people aren’t postured around network marketing. They’ll let you know an anti-MLMer come on their IGTV or Instagram Live and mess you all up and get you all flustered and sad face. I have, by the way, I have that every day like every… I crack up. I don’t have the flustered part but I have the whack-a-mole out there. And so, because of my posture, I can pull off the, “How soon can you watch it?” Because I’m constantly positioning myself as busy. “Hey, I’m really busy today but I’m happy to send you the video. How soon can you watch it?”

I have learned, over the years, that some people just can’t pull that off and so I would release some of your anxiety about them answering that question but I would be addicted to your follow-up. And so if they say, “I’ll let you know when I watch it,” I would respond with posture and I would say, “Okay, that’s fine. I’m very busy today and tomorrow but let me know. I will do my very best to get back with you tomorrow afternoon.”

Now that’s a postured answer. That’s a, “Oh, oh, oh shoot. I thought she was begging me over here and dang, she’s actually up to something.” That’s actually very attracting. Now people that don’t understand that they think, “Well, Raysies, if you say you’re busy won’t they think you’re too busy for them?” That’s not how it works. How it works is we’re attracted to busy people and I don’t mean sexually necessarily, but with that meaning, “Hey, someone’s up to something. What are they up to?”

And I’ll give you an example. I’m working on, he doesn’t even know this yet because I’m working through a partner, but I’m working on a partnership with Evan Carmichael. And I love Evan. He’s amazing. He doesn’t know this yet, but this is a guy making it happen. I resonate with him. So I’m like, “What? We should be doing stuff together. Let’s go.” Now, if Evan was not making things happen, I would not be pursuing that. Does that make sense so far?

Ray Higdon: Okay. What was your second question? I’m trying to remember now.

Cassandra: Well it was when you reach out

Ray Higdon: First, does that help your first question?

Cassandra: Yes, it does. And it’s funny you say that because I’m actually in your inner circle and Katie’s my coach and we’ve talked about how uncomfortable I get with asking that question of, “How soon are you open?” And so I’ve been trying it more but maybe I change it to something I’m more comfortable with. I don’t know.

Ray Higdon: Okay. And first I’ll answer my Instagram guy here. He says, “Can I speak in Indonesia language?” I cannot. I am sorry. That’s that’s a good question though.

I almost asked that question, but let me give you a truth about prospecting. The thing that you’re so nervous to ask is going to come up and smack you over and over and over and over. Some people it’s, “I don’t have the money.” They’re just terrified of that objection and so they get all the time. What you focus on, George Zalucki, I love the way he says it, “The thinker thinks. The prover proves.” If you think people are going to be resistant to that question, you’re going to have to experience that.

And something, I had an amazing breakfast with my oldest son this morning. I mean he is, oh my God. He’s so wise. He is, oh, you’re so smart. So wise. Just amazing. And I was explaining to him the difference between, which I learned, it’s not my material, I learned from Joe Dispenza. There’s a Newtonian model of the world and there’s the quantum model. The Newtonian model is things happen and we just observe them, “Oh, there they are. Huh? Someone had an objection. Hmm.” The quantum model is we are creating the matter and things in our life through our previous thoughts, patterns, habits. If we give attention and emotion to a thing, good or bad, we have to experience it.

If you start right now, let’s do a little experiment. You can let me know later. All of us on here, okay? I want you to start thinking about someone that you haven’t talked to in a long time. Haven’t talked to them and I want you to be grateful that you talk to them and really feel that like, “Man.” Not that, “I sure hope I talk to them,” but I want you to start acting as if you have talked to them and be really grateful for that conversation and I’ll do it too. Let me think for a second here. Okay. Got it. Awesome. God, it’s so great to talk with him. That is so cool. Got it, right?

You do the same thing and see if that comes up. Now, if you’re a skeptic, if you’re like, “Nah. I ain’t doing it. Nah. This is hogwash.” Then it ain’t going to happen for you. But try it out. Just test it out. Whatever we’re giving the most attention, good or bad, is what we’re going to experience. If you have resistance around that, unless you can alter that, then I would change.

And I have found that is one area that I have noticed that some people really struggle with and so they just shouldn’t say it or fix it or, finding out how soon can you watch the video, for me, is kind of an optional thing. Now, if you’re super postured, like I am, then it’s not a big deal. People tell me. I don’t have an issue with it. I don’t ever have someone say, “I’ll let you know.” It just doesn’t happen that way because that is not a fear of mine. It’s not a focus of mine, okay?

And so you have your choice. You can fix it and no longer have a hangup about it and you’ll probably not get it anymore. Or you can take the easier, faster route and just no longer asked that. Say, “Hey, I have a video. Happy to send it over to you. Just let me know when you’ve watched it.” And if that reduces your resistance, you will get better results.

Ray Higdon: Good for you. Good for you. But I would, and just a reminder about posture. Every communication is a chance to build posture and posture is not being a jerk. I’m not saying be cocky or be arrogant or like, “I have more important people to talk to.” I’m not saying that. I’m just saying, “Hey, I’m super busy. I’ve got a lot going on but tell you what I’ll do my very best. I promise you, I will attempt my very best to get back with you tomorrow afternoon.” Now you may not have anything going on but just you positioning it like that, you’re going to get better results.

And in section two of The 1-Minute Influencer, the entire section is conversation and conversion. It actually walks you through these kind of scenarios. Not prospecting necessarily but handling leads. Someone follows you because you’re crushing it with short videos after watching section one, what do you say to them? How do you bring it up?