Upper Limit Problem – How To Break Through Your Ceiling

Naturally, people will have an upper limit problem and get to the point in their life or even business where they believe they shouldn’t push to get out of their comfort zone. In today’s training, Ray will share how to break through the ceiling that prevents you from getting greater success. 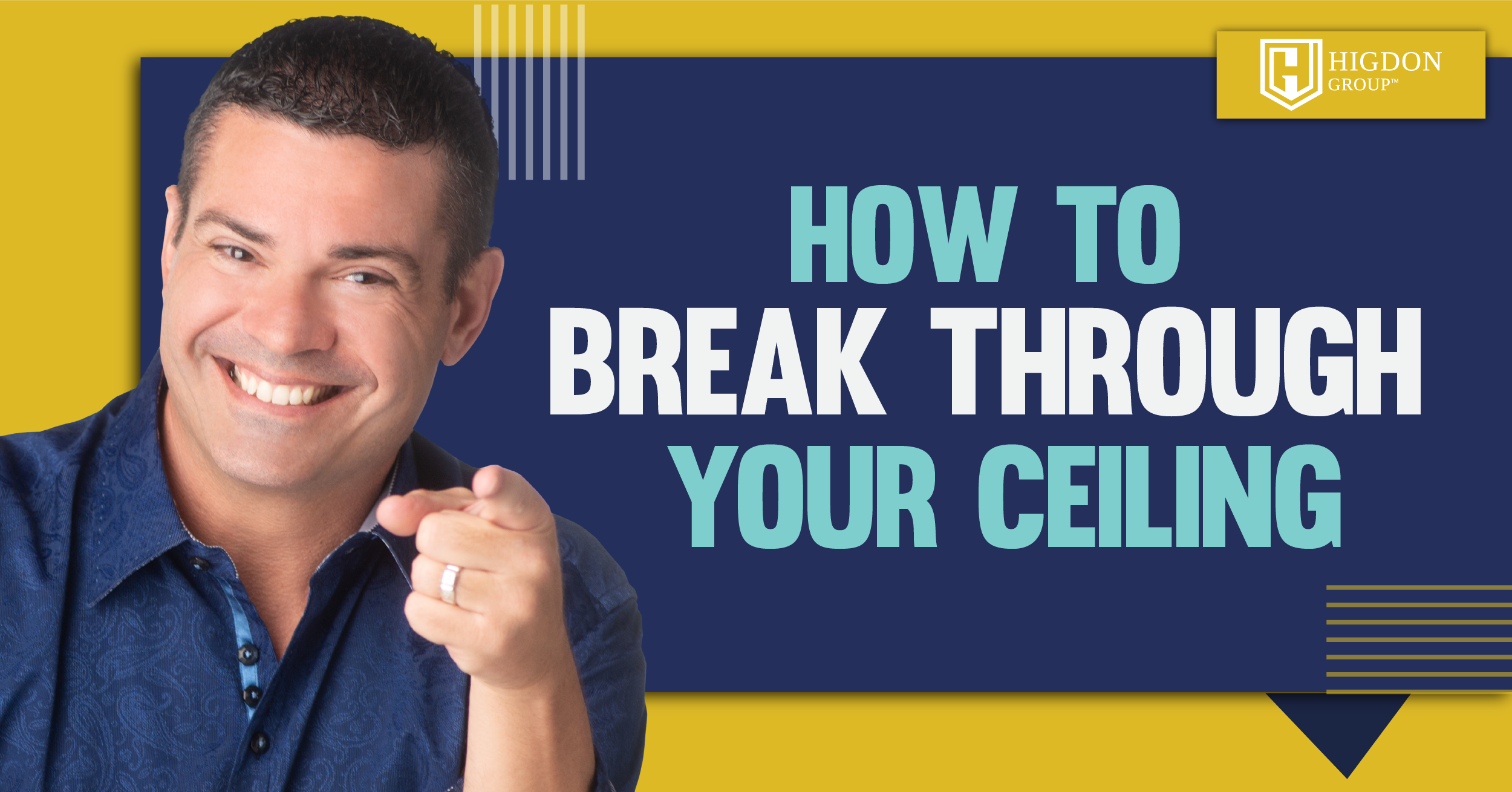 How To Break Through Your Ceiling

Larry: So, here’s one thing that Cedric asked and beat me up with positively speaking for a while, because its been a block for me. And he calls me David Copperfield. This is one of his other nicknames for me. And what that means is, I’ll be going along just fine financially, and because of that, I don’t really push hard, but the moment I am in some kind of a financial challenge or struggle, he says, I turn on David Copperfield. I come up with these magical ways to solve the money problem. And then once the problem is solved, then I go back to being dormant. It’s kind of like the Hulk versus David Banner. I mean that would be another way of looking at that…

So, I wanted to kind of just throw it out there. It is something that’s been with me for a long, long time, and it’s been incredibly difficult to try to get to the root of the problem. Because it has caused a rollercoaster in my finances over the years.

Larry: Even though, I’m talented enough not to have those problems, I’m still having them. So, I wanted to just throw that out there and just [crosstalk] trying to get your thoughts on that, man. And I appreciate you, bro.

Ray Higdon: Yeah, man. And, I want acknowledge you for being vulnerable and sharing that, man. First question, this is the poke that I mentioned, what did your dad do for a living?

Larry: My father worked for G Corporation on the assembly line for 30 years. He was a factory worker.

Ray Higdon: And was he pretty present or did he have any health challenges?

Larry: No health challenges. But when you say, present, define that?

Larry: No. No, no, no. My father worked and then once he got out of work, he sat in his room and watched TV. Yeah. He was completely not involved in that sense. I mean, he was a…

It was kind of like this, he was always there, but found a way not to be around. If that makes sense?

Ray Higdon: Okay. All right. Was there someone in your family that was like a mentor to you? That uncle or anything like that?

Larry: No. I never really had any mentors, until I got to be an adult. I ran into my first mentor when I went to Columbus.

Ray Higdon: Got it.

Larry: But during my childhood, no. No mentors.

Ray Higdon: Okay. Was there… I’m just poking here man, because I…

Larry: I appreciate it.

Larry: If you were defining successful as [crosstalk]?

Larry: No, no. Everybody around me was basically struggling. So, I had no examples of that until I really got into network marketing in my twenties.

Ray Higdon: Yeah. So, I’m not sure the root, but one book that I would suggest is The Big Leap by Gay Hendricks. And what he talks about is a upper limit belief and it was very helpful for me, for sure. And it’s been helpful for a lot of people I’ve suggested that too. So, if you find yourself going to a certain level and then it’s like, “Okay, we’re good enough now.” And then, falling off, it’s something with the temperature of your ceiling.

And that doesn’t mean that that’s where you’re capped with potential, as you know, right. You could blast right through that ceiling. But there’s some kind of conclusion you’re drawing of, “If I go above this, something bad will happen.” And it’s something you’ve experienced. It could be personal, because I’m not… I didn’t quickly find any obvious ones there in family dynamics, but there’s some conclusion you’re drawing of, “If I go higher than this…” And this happens in all kinds of different areas. So, I think I know the reason why, but because I’m not positive, I won’t share it, but…

So, I’ve been losing weight, right? And so my history is, I would get up to… I mean, at one point I was 255 pounds, right. Which is way larger than I normally have been. And that was quite a few years ago. But usually in the past, I should say, okay. And notice my language, anytime I’m sharing a personal accounting of a pattern of mine that I do not want to repeat, I put it in the past. Because I don’t want to say, “Hey. Yeah, every time I go here and then I go here,” because that means I’m still propagating that pattern.

So, any pattern that doesn’t serve you, put it in the past. And so in the past, I would wake up one day and I’m 220 pounds. And be like, “Dammit, this sucks.” And so I would go hard and I’d do this and I’d get down to 203. And at 203, I would start bouncing back, right. And it just… That happened all the time. It’s happened for probably 10 years at least, at least. Probably 15 years actually.

And so, I’ve been losing weight and about two weeks ago, I get down to 203. And so at 203, I have massive stomach aches for the next three days. And so, what that was, as far as the root cause, I have a suspicion, but I don’t know for sure. What that was is, my body mind trying to prevent me from going into whatever danger it thought I was going into, right. Not starvation, but there’s something it associates with being lower than that weight. And so it started creating illness in me. And on day two and a half of this crap, I just say, “Listen, I’m the master, I’m in control. You’re not going to stop me.” And I literally spoke to my body mind and I’m now at 198.

And so, that was a ceiling. And so, I would look at, is there an association with the ceiling that you’ve gotten to, right? So for some people, they saw their father work themselves into a heart attack. So they draw, “Hard work equals, I’m going to die early on my family and I don’t want to do that,” right. And so there’s… You’re going to find, there’s some reason why… And it probably…

Because I know how much you care about your family, and I know how much of a family guy you are. And so there’s probably some correlation to, “If I make more, or if I work harder for longer, then this is going to have a negative reaction on my marriage or on my family.” I bet, and this is a guess because I wasn’t able to pinpoint it, but I’m going to guess it’s going to be something around that.

Larry: Yeah. I appreciate that. Yeah. It’s interesting how this journey right now, I’m working on a lot of anxieties that I’ve never really shared before. But approaching 50 years old, it’s like, I want to really get a handle on it. I was just the other day going through some… Thinking about you, actually, about being consistent. And Cedric said it best earlier, but…

So, I’m at [Primera] and I have Trello and I have a couple of things that I purchased to help me get more organized. And then, bro my brain, it just felt like it just swole up to the point where I couldn’t think. My heart was racing. It’s like, “What is all of this going on when it comes to just stripping, trying to get more organized?” It’s like, it completely shut me down. So, it’s like, I’ve got to get to the bottom of this stuff, you know what I mean?

Ray Higdon: So, I’ll tell you that… I mean, when you… And this is… Yeah, I’m talking to you, but I’m really talking to everyone, right. Everyone’s learning from this because you’re being vulnerable. So, that’s amazing. Thank you. And everyone, be sure to thank Larry for this.

So, when you have… And people just don’t get this. And there’s a guy out there, Dr. John Sarno, who… He helped… He’s since passed away, but he wrote a book called Healing Back Pain. And he helped tens of thousands of patients that had back pain, elbow pain, knee pain, shoulder pain, their entire life, and he helped them understand that that was all emotion. That it was resentment, guilt, shame, anger, and that they didn’t have to have had all those surgeries they had had. And Gay Hendricks talks a little bit about that, not nearly as deep as Sarno, but it’s interesting. People think that, “Just my body. Just my aching shoulder.”

Well, here’s what I’ve felt, is… I’ve felt that, when I have a new vision, you know, like… I don’t know if I should share this or not, but I… I mean, I see… Just the last couple of days, I saw a vision of having these… This may sound weird, but having these 50,000 person communities around the world that are all focused on creating acts around the world.

And so when, not if, because if you’re still on Free Coaching Friday here, then you probably are playing big. The people not playing big, but just want to know the latest hashtags, they left, right? They’re gone. So now we can talk amongst ourselves.

And I had to say this… Although I still say it, I don’t need to anymore. I had to say this when I first started taking cold showers. So, I hate cold water, man. But I knew the cold showers did two things. One, I know that they’re good for you, right. They help with circulation and other things. But I also know that anything I can do to master the body mind is helpful for mastery of all other things. And so, I’ve now… I don’t even remember the last warm shower I took, but it was probably six or seven months ago, or something like that.

And so, what I used to have to do is, I would approach the shower. It’s super cold. And I’d say, “I’m the master. I’m in control.” Then I would go under and whatever, and it’d still be cold. Now, I just don’t even feel it anymore. So, I don’t have to say it, but I kind of still do. So, when you’re having that physical sensation, but you know you’re on a path, right. You know you’re on a path of going to a place that’s unknown, that is helpful, that is growing you. “I’m the master. I’m in control.” And that, at least, has helped me, it’s helped some of our clients as well. Is that helpful?

Larry: Oh, yeah. Absolutely, man. I appreciate it. Thank you for allowing me to share.