How To Make Your Mentality A Reality

Turn thoughts into reality… “if we don’t know what we want, how do we expect to get there or get it? It’s like in Alice in Wonderland, if you don’t know where you’re going, then any path will take you, even a bad path.” 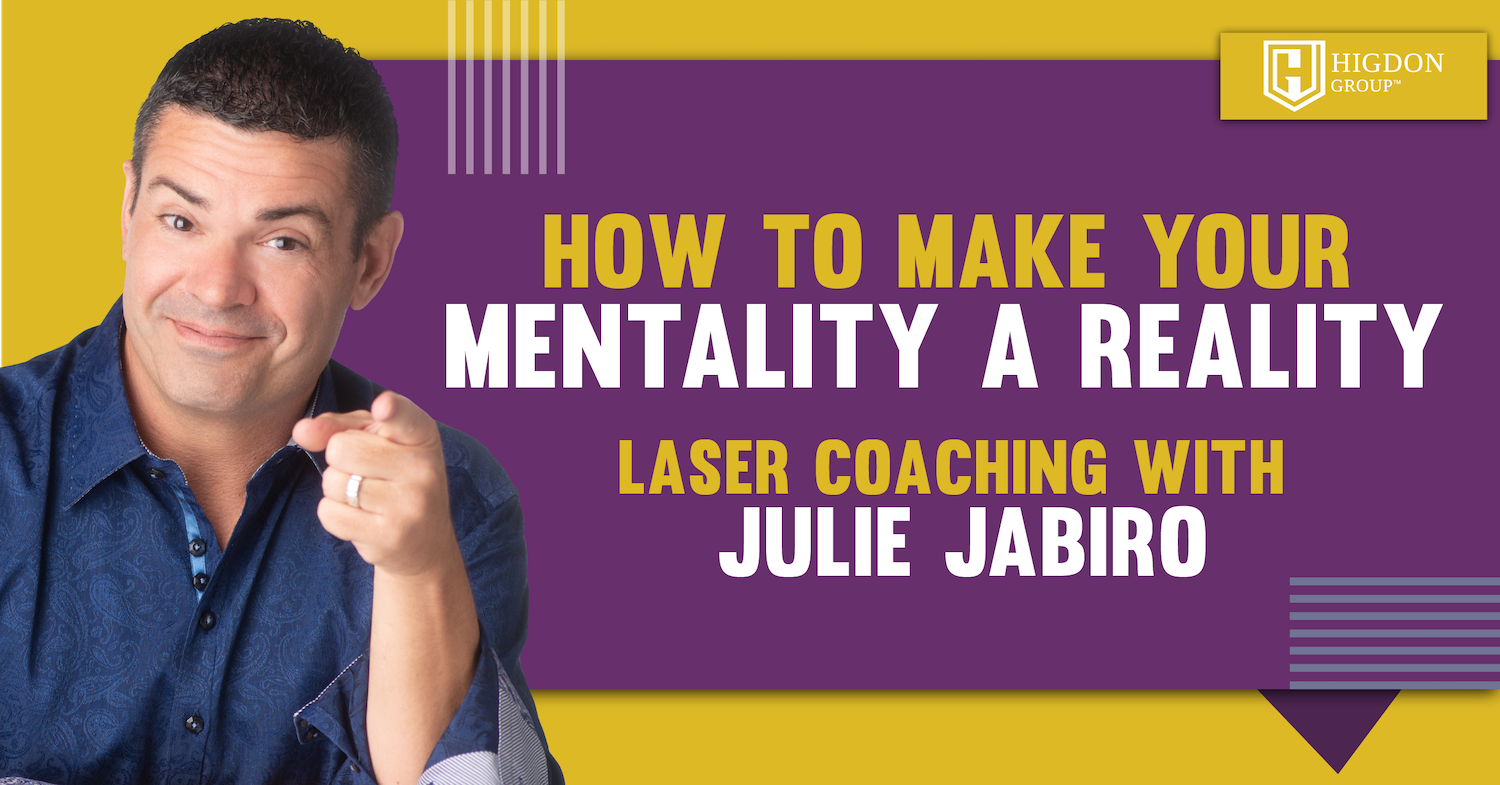 Ray Hidgon: Very, very cool. Tell me a little bit, how’s your network marketing journey been? How long have you been in, what are you up to?

Julie: Long time ago I did when I turned 18, that was a disaster, and did all those and failed miserably, so I was done with it until just

Julie: I was 18 and it was not at all what I wanted to do and it was just parties and pushing things and I was, “Neh, not my thing.” And then I taught ballroom dance for a long time and then it just wasn’t something I wanted to do. And then actually the last five years, probably I was looking for my son, my oldest, who has Tourette’s, I was done with doctors and on this mission to find something to help him myself.

Ray Hidgon: Even a path of abuse, even a path of negativity, even a path… If we don’t know what we want or where we’re going, then just keep doing what you’re doing. We want to know, who do we want to be, where do we want to go? And once we establish that, is it, and I don’t want to put words in your mouth, but what is it? You got a magic wand, poof. “I’m the Julie, I want to be…” What does that Julie look like?

Julie: You want an answer now or am I supposed to think? Successful.

Julie: Do what I say I’m going to do. Follow through with it. I’ve been training and training

Julie: Yeah. As far as the prospecting and stuff, and then I just find every other thing that’s not right so I can’t do it.

Ray Hidgon: This is a big deal because unless someone’s just a con artist, unless someone is just a scammer, it’s very difficult if we don’t keep our word with ourselves, for us to expect anyone to trust us, for us to expect… And we don’t ever say that consciously. We don’t say, “I don’t think people trust me.” We never say that. But subconsciously, if we say, “I’m going to go for that run, I’m going to write that book, I’m going to reach out to 10 people,” and we don’t do it, every time it’s a chipping away at how we believe in ourselves and in our integrity with ourselves, which impacts every other piece of integrity in our entire life.

Ray Hidgon: Were you excited about that business?

Julie: Oh yeah. We both were.

Ray Hidgon: You may draw the conclusion that the more excited and the more I show up for my business, tragedy follows. How does that feel?

Julie: That that makes more sense and I honestly never even put it together until something you just said.

Ray Hidgon: 95% of what’s going on is our subconscious.

Ray Hidgon: 5% is what we consciously think. I think I want a sandwich now. 95% is just on autopilot and patterns and addictions to emotions and we’re just this meat suit that someone else is pulling the strings. We’re not pulling the strings because all the programming and things that we’ve observed, that we’ve translated are running ourselves.

Ray Hidgon: And so there is no compartmentalization of, I was super excited about a business. I think it was going to go amazing and then my best friend in the world killed herself and, oh, that’s a compartmentalized thing. Now we can just run a new business. No, what’s the conclusion I could draw. What’s the conclusion you drew from that unfortunate thing that happened?

Ray Hidgon: Right, after that, but before that it sounds like you guys were excited and fired up.

Julie: Oh, yeah, we definitely were. And then, I don’t know. I honestly never really… I would see our papers and stuff every once in a while that I have for taxes and I would lose it, but I honestly never thought anything more. I was mad at her.

Julie: Just in general, I’ve had way too many suicides in my life, but that one was the worst. A business just never even crossed my mind again, that wasn’t… I was a makeup artist for 20 years. This was just an addition so it didn’t phase me that much, but never really thought about it.

Ray Hidgon: Well, if it’s coming up, it’s trying to tell you something.

Julie: Never consciously thought that, but that sounds about right. How do I fix it?

Ray Hidgon: What would that look like? The most powerful version of Julie that exists.

Julie: Well, I would have a ton of money and it would be, every birthday I do the suicide donation things and awareness so that would still be a lot more and just helping people obviously because she was the 13th one since I was in high school and that’s ridiculous. That’s a big deal and just be home, but not a stay at home mom, like people say it’s a bad thing, I could work a few hours a day and actually be there and raise my kids and stuff and not have to worry about money so I could do everything, for everybody else too. I want to be you when I grow up.

Ray Hidgon: You have a very unique story. You could certainly give money. I could give money, and we have, to help with foster care, but instead I’m rolling up my sleeves and I’m being involved-

Ray Hidgon: … and so can you. And I just want you to understand that when you go into this world, you have the possibility of actually preventing suicides and you sharing your story. You already have a story like many people, of trauma. Yours is unique, just like mine is unique, just like everyone else has something unique. Yesterday I was coaching someone with cerebral palsy that has family members that picked on her and made fun of her. It’s just ridiculous. So she has her story, but what makes her story really get out there and really make a difference is when, despite the story, you go create success.

Ray Hidgon: Because you’re saying it, “I didn’t even care about the business after that.” Yeah, that makes sense that you didn’t, but it’s also carried over. It’s also carried over into with one foot on the brake, you’re trying to build a business, but if you have this–

Julie: That’s exactly what it’s been.

Ray Hidgon: … “Oh shit, what’s going to happen? Let me overthink it. You know what? I probably need business cards. You know what, what color? Purple. I’ll get purple, I’ll have lines. No, no lines.” Let’s just waste time doing nothing so that we never have this tragedy.

Julie: That’s exactly what it is. Wow. That was pretty much spot on.

Julie: Wow. Yep. I think that’s exactly what was happening.

Ray Hidgon: How does that feel?

Julie: Strange, but good. I didn’t know that that was even a thing. And I figured it had something to do with my medical history and growing up. But, wow, it makes sense.

Ray Hidgon: A couple of things for you. One, I would take a minute and write it on a piece of paper. Who is the Julie you really want to be? What does that look like? I’ve thrown some stuff out there, but you write it in your own words and that’s the person that you’re becoming and eventually who you want to be. And if you do that walking trance, be that person. I’m telling you, you’ll feel different. Be that person that just got asked to speak to the international conference against suicide. The suicide awareness convention, the suicide… Really be that person who’s being ushered into the green room to get ready to go up on stage and impact people. Only if that feels good to you, if it doesn’t feel good, then throw that away. But what would make you really feel good and what version of yourself? And take the time to write that down so now we have a target.

Ray Hidgon: And then the next time that you find yourself overthinking it, move forward imperfectly, just like you have with meditation, just like I did with meditation. I’ll tell you a funny story. One of my coaches, he’s been telling me for two years, he goes, “Dude, you need to be doing more face-to-face coaching online. You coach people behind the scenes, they blow up their business, they change their life and no one ever sees it. You need to be doing more of this,” what we’re doing right now. And I’m… And I was honestly scared to get it wrong. I was scared to mess up. I was scared that I would miss a clue and I would misdiagnose someone and tell them to do something that actually wouldn’t help them. And so he’s, “Well, how did you get into meditation?” This was recently, this was actually last week. And I said, “Well, I just started building the muscle and I did it wrong the first few months.” And he’s, “Exactly, freaking do it.” And so this week I’ve done at least two laser coaching sessions a day–

Julie: I love it.

Ray Hidgon: …. one, to build the muscle because I see this as making a difference. We see the comments of people losing their mind because you’re impacting people right now by being vulnerable and all these comments are coming in on how you’ve helped them. You already have the power to help people and impact people and just move forward imperfectly. You’re not going to get every prospecting thing right, you’re not going to get every follow-up perfect, but you’re going to keep moving toward that person you want to become by stepping into that action.

Julie: I love it. Thank you.

Ray Hidgon: Does that help?

Julie: My wheels are going crazy now, but yes, it’s very… I don’t think you could get it wrong and it’s not like you’re going to do this wrong because nothing is going to hurt. Thank you though. A lot to think about now.

Ray Hidgon: Think about, or you going to do some things?

Julie: Well, think of me for what I want and then I’m going to walk.

Ray Hidgon: Okay. All right. All right. Well, keep us in the loop. We’re rooting for you.

Julie: All right, thank you.

Ray Hidgon: All right. Julie, everybody.