Teaching Posture To You And Your Network Marketing Team 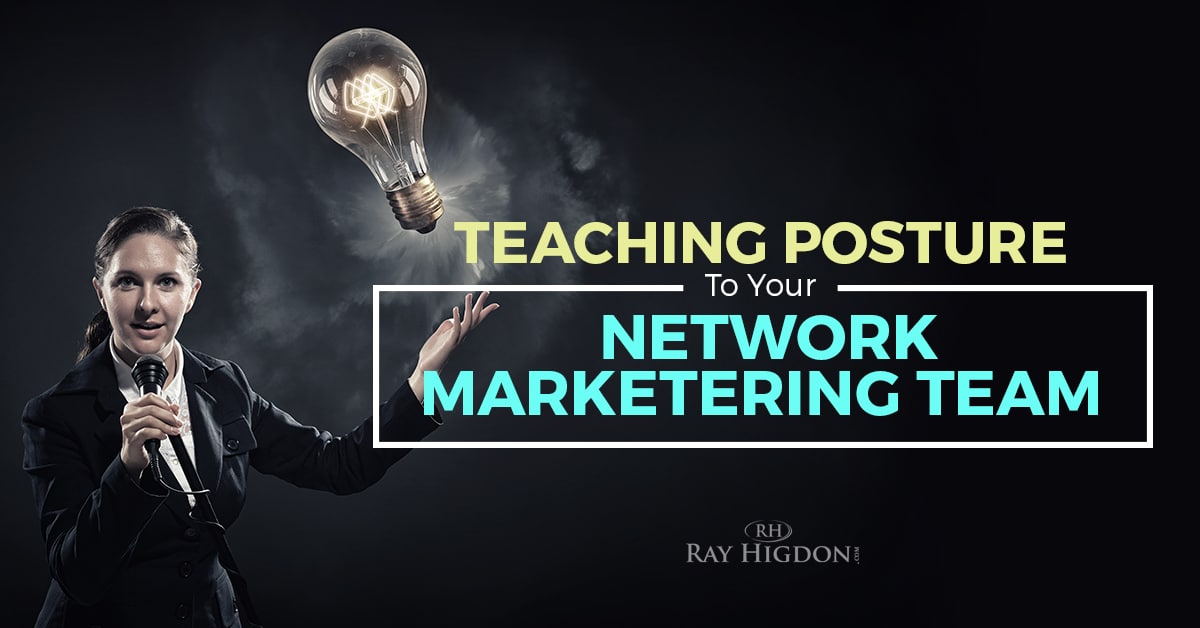 What is Posture? How do you teach posture to Your Network Marketing Team?

In this post I share what Posture is and how your Posture in Network Marketing can help you dramatically Recruit more Reps.

The famous analogy that I use all the time is in one of the Matrix movies. If you haven’t watched the Matrix, what’s wrong with you? Come on, it’s Matrix, watch it.

In the Matrix, Lawrence Fishburne plays Morpheus, and Morpheus is the wise dude and he believes that Neo, who’s played by Keanu Reeves is “The One.” The messiah, the one that’s going to, not religiously, but the one’s that’s going to save their post-apocalyptic world from I guess destruction, right? Morpheus is telling everybody, “Hey man, Neo’s the one. Neo’s the one.” There’s a guy that says to Morpheus, he goes, “Not everyone believes that Neo is the one.” Morpheus say’s, “My belief doesn’t require them to. My belief doesn’t require them to.”

When it comes to network marketing, not everyone believed in network marketing when I started. Some still don’t obviously. People connected to me, I had a lot of skeptics, a lot of people say, “Oh those things never work,” or, “You’ve got to be at the top,” or, “Good luck with that man, it will probably shut down.”

I got all kinds of those kind of comments, but the difference was, my belief didn’t require them to believe. See some of you guys are joining network marketing business and you’re hooking your success to, “I can only succeed if everyone around me believes in it.” Baloney. You don’t need acceptance or approval. You don’t need others to believe in you, you just need to get to work. Just get to fricken work. Right?

I’ll give you a little bit different way to look at it. I’ve surrounded myself with people who have created success in network marketing. I’ve been to a lot of company events. We’ve coached probably a 150 six-figure earners, probably 25 seven-figure earners, right? Right now we have four, maybe five people that have teams of over 100,000 people and one of our clients once had a team of over 700,000 people. I know that it works. I’ve seen it. Right? It works. I’ve seen it.

That’s your belief. I have that same level of belief. You arguing, me arguing with you that electricity is a scam, is the same energy you have when someone say’s to me network marketing is a scam. My belief doesn’t require people to accept or approve or believe in the network marketing profession, because I’ve already done my work on my end. Most people haven’t done their work on their end so they crumble like a cracker. They melt like a snowflake when someone says, “I don’t think that will work.” Really, you don’t? Oh no. Right? You’ve got to have more belief in you and more belief, not necessarily in you, but more belief in the profession that it works and it can work, than you require acceptance or approval or belief from external forces.

Building Posture Into Your Team

One way, get used to not being so addicted to the outcome of a recruit. I’ll give you a fun little exercise. This is totally outside the network marketing niche, but it’s a fun little exercise. Go to a yard sale. Go to a yard sale and pick a table of stuff that you don’t really even want, and make them a ridiculous offer. Just to get used to this whole process of not being addicted to the outcome, and say, “Hey, I see this table of power tools, I’ll give you five bucks for it.”

Stop trying to be so focused on closing every person that you meet, and instead let’s see if they’re open first. Let’s see if they’re someone that has a good attitude, good energy, and then you ask the right kind of questions. I’m not saying not to learn closing because there’s a lot of open people that you guys may not be closing because you don’t know what to say, but what’s worse is you’re trying to close people who aren’t open. That’s where you get frustrated and that’s where it starts to suck. Lessen your energy around rejection. Understand it’s okay to get a no. I want you to like get prepared for no.

Understand that no is not bad and neither is failure. All of those things are lessons if you allow them. Someone who’s wanting to build their posture, their enemy is perfectionism because there is not perfect pitch that is going to close everyone you meet. Be okay with no, be okay with rejection.

For more on teaching Posture to Your Team watch the video below.

What did you think of that? Let me know below by dropping a comment. Feel free to share this with your teammates!

If you enjoyed this post about Teaching Posture To You And Your Network Marketing Team, retweet and comment please