Your struggles in your business are not from the lockdowns. Today Ray talks about how to prevent burnout at work and how your mindset is the main cause of the struggles you may be facing this past year and a half. 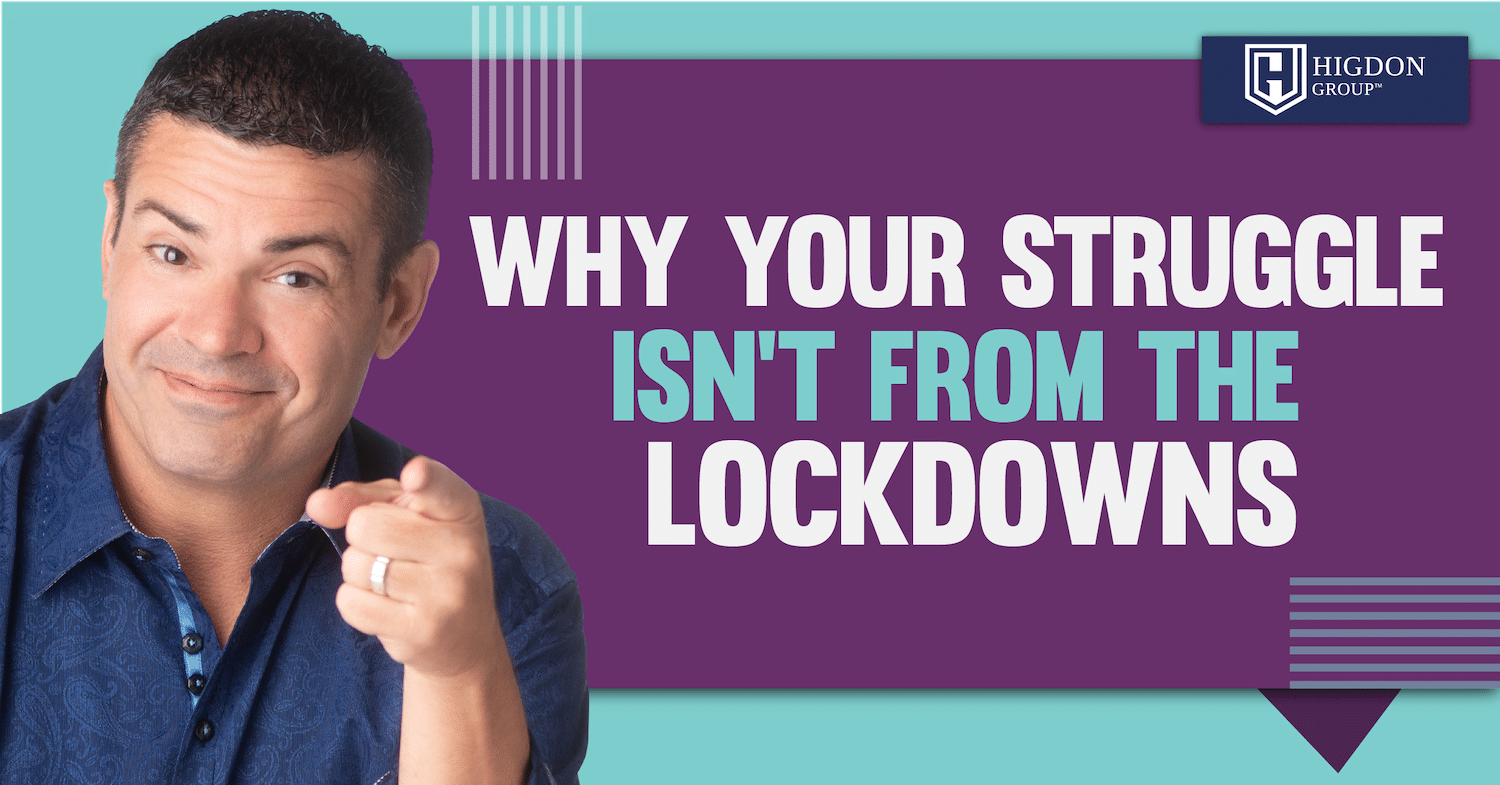 Why Your Struggle Isn’t From The Lockdowns

Ray Higdon: So, you’re a lifer in Rank Makers, so they are in Rank Makers. I did also put them in the One Minute Influencer for those that get that course. I would watch those. There’s two of them, part one and part two. So, the biggest thing to take away here, where we’re at, and this is, we’re not at the core of the problem, but there’s a realization that can help you and that is your struggle has absolutely nothing to do with the lockdown.

And here’s why, the important question that we’ve uncovered so far is, has this happened before? And you said, “It’s happened in every company I’ve ever been in.” So what that means is you have a pattern, right? And it’s, I don’t want to say always because I don’t know that for sure, but it’s almost always a protection pattern. So a protection pattern will do things in a way that protects you from the thing you’re most afraid of. Now, if your dad had been a hard worker and passed away, you might associate success with hard work, which means you’re going to die and leave your kids and so you’ll protect yourself from creating success.

I don’t suspect that’s the deal here, but there is some kind of protection mechanism that is preventing you from success because you have a non-reality-based conclusion to success. You know what to do. You could have success, you have all the skills because you couldn’t get to just the level that you’ve gotten to without that awareness. But there’s some kind of protection pattern that is keeping you safe. And one thing that people don’t understand, I understand because I have this is you have a body-mind. Okay? So I’ll give you two different examples of where I’ve experienced the body-mind, three different examples.

So one, I used to not be able to sit and meditate because my back would hurt, my legs would get sore, my shoulders would ache, and I would just be like, “You know what? I got to lay down.” Well, there’s a lot of meditations that if you lay down, you’re not really getting the full benefit. And so that was the body-mind uncomfortable with my growth and the direction in which I was going.

So I had to gently remind the body-mind that I’m the master, I’m in control. You don’t tell me what to do, I tell you what to do. And I exhibit this every single day when I take a cold shower. I don’t want to take a cold shower, but it’s an example of mastery. My body is like, “Oh God, I don’t want that. Why don’t we just do warm this time? Just one time, we’ll start tomorrow.” And that’s what the mind-body does, is it tries to keep us safe. Okay?

And so the second area I’ve experienced this, I’m going to go from mild to extreme. So, today for the first time in many, many years, I weigh under 200 pounds so I’m back 99 today and feeling great. But my pattern, my mind-body pattern is 203. So I’m losing weight, losing weight, losing, losing weight, and historically my pattern for as many decades as I can remember is I would get up all the way, one time I was all the way to 255. And I would drop, drop, drop, drop, drop, get to 203, start going back up get to 220, 205, 230, 215, right? And so I had a mind-body that had a comfort level at 203. And so about three or four days ago, I get to 203, guess what happened? I started having massive stomach aches. I start having my body rebel against the losing of, let’s not go beyond 203 man.

And I have a feeling, I know what it is, I don’t want to go there today because this isn’t near your story or that important really. But I had to remind my mind-body on day two of that bullshit that I’m the master, I’m in control. And I basically told my stomach to F you. And so today I’m 199. I’ll give you the most extreme example for me. And I don’t know exactly, I don’t recall exactly what year it was. But one day I’m lifting and I’m getting in better shape and all of a sudden, my elbows, well actually first, it was my right elbow, my right elbow, just massive pain, oh my God, massive pain.

All of a sudden next week, both elbows. Both elbows are in extreme pain and I’m like, “What the hell is going on here, man?” And I’m wincing while driving. So I’m driving and I’m just like, I might shed a tear while driving cause my elbows hurt so freaking bad. I go to acupuncture, I get cortisone shots, I’m doing everything I possibly can, man, and nothing’s helping it. And then I read this book, I read a book and this is, this gentleman has passed away, by Dr. John Sarno, which will be my first recommendation to you.

Dr. John Sarno wrote a book called Healing Back Pain. And this guy had treated tens of thousands of patients that had back pain, neck pain, shoulder pain, ankle pain, knee pain, elbow pain, all kinds of different stuff.

And he found that in almost, he found actually, in 100% of the cases, if there wasn’t a traumatic happening and a very high percentage even when there was a traumatic happening like you got hit by a car, or you fell off a bike, or you fell down a mountain or whatever, he found 100% of the times when there wasn’t a traumatic event to the infrastructure of your body, that it was a mental thing, and it was your body protecting you. And he calls it, God, it’s been a few years since I read it. Oh crap. I forget the name.

But if you look him up, John Sarno, S-A-R-N-O, he’ll break it down for you, and he can say it way more eloquently than I can. But I read this book and I read one of the chapters… I wasn’t even through the whole book and it says, “You tell your area of pain that you just don’t need that anymore and thank the pain for trying to protect you. But you’re just an emotion, I really just don’t need you anymore.” I read that line, my elbow pain is gone. After years, thousands of dollars, I’d tried three different chiropractors. I had one guy going at it with a grafting tool, hurt like hell, the cortisone shots, not fun.

Anyone had a cortisone shot? They sting man. In the elbow, right in the elbow, sucks. I read that line, my pain was gone after having it for years and it’s never come back.

Paula Snow: So, I fell off of a horse

Paula Snow: When I was 32 and I really injured-

Paula Snow: My hip, my gluteus [inaudible], my right side so I have had… Since I’m 32, I’ve had continuous, my leg gets those, my hip gets those and I have

Paula Snow: No. This company, this product that I ended up using, I got it because of my feet but it ended up stopping-

Ray Higdon: I just want to pause you for a second because you said something extremely significant there. You said, your words, “When I’m in a new company building, I don’t have the pain.”

Ray Higdon: So your pain, I’m not a doctor, I’m not a therapist, I don’t work at the Holiday Inn. I’m letting you know.

Ray Higdon: Your pain is a protection thing. It’s protecting you.

Ray Higdon: And if, and I would read the book because he’s the expert, I’m not the expert, okay?

Ray Higdon: I would get the book for sure. Now there’s a second book I would suggest called The Big Leap. The Big Leap is kind of like John Sarno for business, but I would read John Sarno first. Especially because you have a traumatic event that you can link to and say, “See, it’s valid. I’m not making this shit up Ray. It’s valid. I actually fell.”

I hear you, but it doesn’t make logical sense that it only hurts you at certain times and at specific patterns. When it’s a pattern, it’s a protection thing. And I have the same thing by the way. Every time over the last, at least 20 years, at least 20 years, every time when I would start to get in good shape, boom, knee problem. I hurt my knee in high school football, right?

So, let’s justify it, shoulder problem, back problem, elbow problem, stomach issue. My mind-body has been so nervous of my full transformation for so many years that it’s in a pattern of, “Let me protect Ray. No, no Ray. Stay chubby my friend because chubby is safe. Keep those love handles brother.”

And I have an idea of why it does this but we don’t need to go into that. And so as far as the tactical answer you’re looking for, which is never the answer, but I’ll give it to you is, don’t overthink it. Get back in the saddle. When you reach a certain income level, you’re going to have back pain, and you thank the back pain for attempting to protect you, you read the books, and I think you’ll be off to the races.