How to Increase Your Responses From Your MLM Prospects 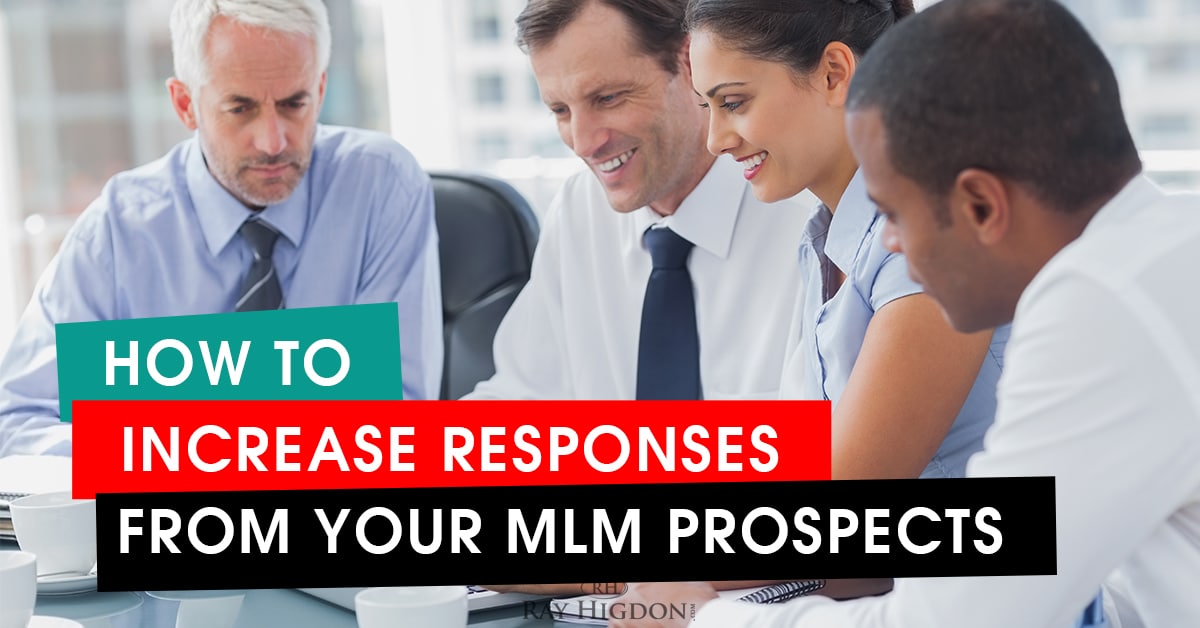 How do you get more of your prospects to respond?

Increase Your Responses From Your MLM Prospects

Maybe you’re out there and you’re prospecting a lot of people online or offline and just not responding to you. Here are some suggestions for you.

1. Don’t Be Addicted To Their Response

Don’t be addicted to it. If there’s one mantra that I would suggest everyone embrace inside network marketing, it would be Say LESS to MORE People.

I can tell you not one time (when prospecting on Facebook) did I go back and look at all who didn’t respond. I ONLY focused on those that DID.

Just keep reaching out to new people. That’s what I did. I focused on who responded.

I can tell you I think too often we get tangled up in knots over the potential of one particular prospect or another and it’s a mistake. It’s an absolute mistake. It’s fine for you to reach back out, that’s fine, but do it powerfully.

We want to followup POWERFULLY.

If I absolutely had to reach back out to someone who didn’t respond, which you know warm market, I did. Cold market, I tended not to unless I had some kind of connection or something like that. I spent a lot more time talking to new people than I did following up with old people, except in warm market. In warm market I did reach back out to people multiple times.

I can tell you my favorite strategy is if you call and you get them on the phone, you connect with them, then I would say, “Hey, we had talked about what I’m doing.”

Obviously some little chitchat first. Don’t be a total android.

Little chitchat first and then say, “Hey, we had talked a little bit ago about the business that I’m doing and the product that I have and I never heard back from you. Which is totally cool. But hey listen, you’re a teacher right? I wanted to reach back out to you because I know this may or may not be a fit for you, but I was just at a company event. And I saw a teacher that just quit their job who’s now making $100,000 a year and I wanted to reach out to you. Although it may not be a fit for you, which is totally okay. Do you know any other teachers who might want to learn how to make some extra money if we show them step by step how to do it?”

If they’re recognizing people, pay attention to the occupations. I found that that’s a really, really powerful for you to connect with people and do a little deferring.

When talking to a prospect, I’m going to say, “Hey, I didn’t hear back from you, which is totally cool. I’ve been real busy, to be honest. This may or may not be a fit for you. I don’t know, but I did want to reach back out to you, because you probably know a lot of teachers and blah blah blah blah blah.” It doesn’t have to be teachers. It could be bus drivers. It could be IT technicians, chiropractors, realtors, etc., and so forth.

Powerful. See, that’s standing in power. That’s posture. That’s, I’m not addicted to the outcome. I don’t need you to join my team. that’s when you’re a powerful prospector, is when you don’t require their acceptance, approval, or require them to join your team. That’s when you’re powerful.

How To Attract and Recruit Strong MLM Leaders

Was that helpful? Did you get value? Let me know what you think in the comments below. Be sure to share this one with your teammates!

If you enjoyed this post about How To How to Increase Your Responses From Your MLM Prospects, retweet and comment please