How To Overcome Snobby Objections To Your Network Marketing Business 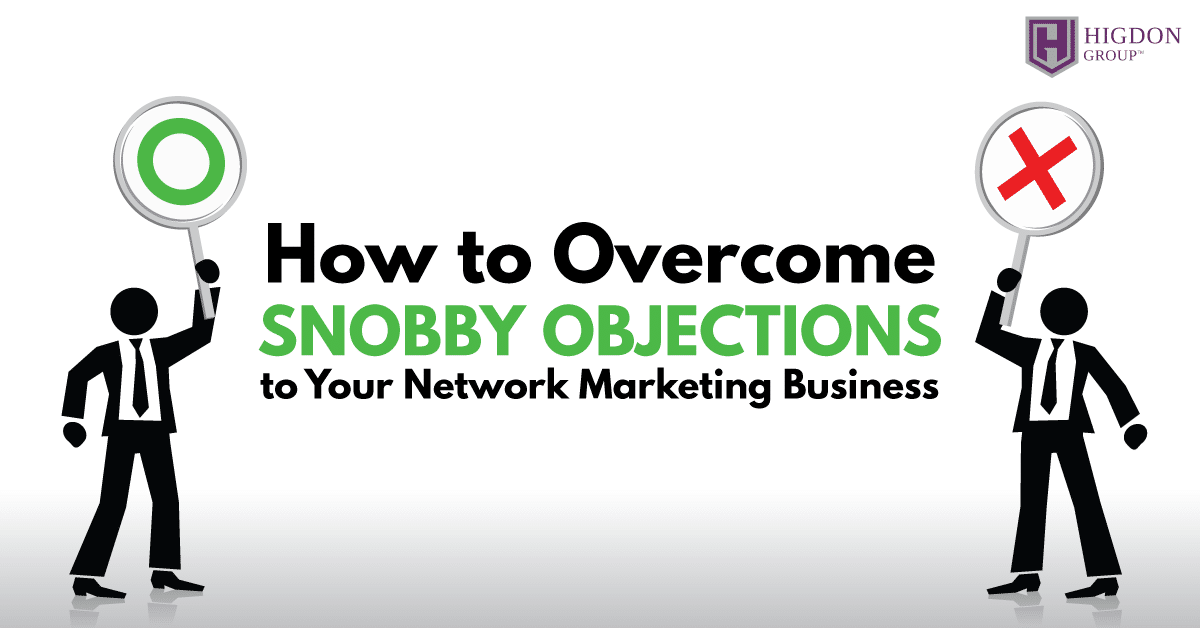 Here I share exactly what to say to stay postured and handle these objections.

How To Overcome Snobby Objections To Your Network Marketing Business

If you’re talking to a prospect about network marketing, and they say, “Oh. I’m a professional. I don’t have desire for that.” Well, this is where it may be cool for you to have some examples.

If I say, “Hey. You know, would you be at all open to this home business that I’m doing?”

“Is that network marketing?”

“Oh. I’m a professional. I don’t have desire for that.”

“Oh, cool. That’s awesome. I really appreciate your sentiment there. You know, it’s funny because we actually have in our team one of the top 10 surgeons in the United States. We actually have my buddy that owns 76 Domino’s franchises, and we got another guy that’s running for mayor a couple towns up in Northern Florida. But hey man, it may not be a fit for you. Totally cool. But hey, if you know anyone that does want to make some extra money and maybe get more time leverage, let me know. I’d be happy to chat with them. But I do gotta run and I wish you massive success.”

And by the way, I told the truth.

Every word I just used were people in the company that I was in.

And so, it’s nice to have a couple examples that just smoke their profession, that just makes them like, “Oh. Those people are way more professional than I am or my profession.” It’s nice to drop the name of a doctor, a judge, attorney, celebrity, sports athlete, ect.

What NOT to do

Notice what I didn’t do…

So, let me give you the different derivations of how network marketers might answer that question.

They would get defensive, which is very weak. And, they have no clue.

But, the weakest network marketer would get defensive. “What do you mean, man?” Or, maybe they’d say the corporate analogy. “Oh, here.”

Someone who’s a little bit better might use similar examples to me, but then they would roll it back to try to close them.

They would say, “Oh, we’ve got a doctor. We got this, we got that. And you know, if they can do it, surely you can too. Would you be open to taking a look?”

See, I don’t like that either. Now, that’s better. It’s better than being a weak, defensive, just wiener, right?

But, I don’t like it. And the reason is, their energy.

When you are about to start a conversation, you’re both neutral.

And I say, “Hey. Would you be open to taking a look at what it is that I’m doing? If you’re not, no big deal.”

So, I’m kind of leaning in. I’m seeing if they’re open.

If they say, “Oh. I’m a professional. Ha. I laugh at your pity little home business. Nah. I’m amazing. This sucks.” Then, they’re leaning way back.

The weak person will lean forward. The postured person leans away.

And so, notice what I did…

I hit them with judge, franchise owner, someone running for mayor. I hit them with three examples real quick, but then I said, “But hey. Probably not a fit for you. Totally cool. I gotta dip out. Massive success.”

So what did I do? We were like this: “Hey. You open to taking a look?”

“Oh. I’m a professional. Way cooler than you are.”

Many times, you know what happens?

“Well, you have a guy run for mayor doing this thing? Really? Like, what is it?”

“Well, man, I really do gotta run, but I’ll tell you what. I can grab your information, I promise I’ll follow up.” See, I stay in that position.

And so, I’m going to manage the energy always.

Now, does that mean I close every person that I ever talk to?

If you’re single looking to mingle, is your goal to date every person you ever run into? I hope not. I hope not, because that is what?

Go to the bank when you need a loan and just say, “Oh, boy. Mr. Banker man, I really could use a loan.” They’ll say, “Security. Security. We got a bum here. We got someone that needs money. Get them out of here.”

And so, desperation doesn’t work.

If you enjoyed this post about How To Overcome Snobby Objections To Your Network Marketing Business, retweet and comment please