What to do if you don’t like your Boss, Upline…or even President

Maybe you find yourself in a situation where you don’t like your boss, upline or even your President…

What do you do? What actually makes sense to do that MIGHT better your situation? THAT is the topic of today’s show! 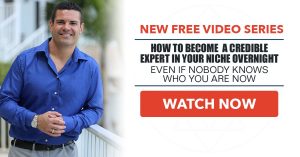 This week we are doing a very special (and free!) video series on personal branding and growing your business using the Internet. In fact, in these three videos we share how to position yourself as an authority regardless of your current results. All three videos are available right now, Click Here to Watch!

What if you’re in a job, don’t like your boss? Well, in my opinion, the worst thing that you can do is focus on how much you don’t like the boss and notice all the things you don’t like. It’s been my experience when I’ve had bosses that a lot of other people didn’t like, I did okay. Always focus on how you can add value to the company. Always focus on how you can make your boss look good. If you do those two things in a job, you’re going to increase your chances that it’s not so bad. AND the trick is to do these things WITHOUT expecting THEM to change. WHEN you combine that way of thinking with those actions, I have seen miracles happen.

There are some people that are just total jerks and just horrible, right? I’m not saying it works 100% of the time. I do know that shifting your focus on what’s wrong, what’s bad, how they’re bad, how they suck and all those things, just shifting and focus to what can I do with what I have is very powerful. A lot of times what can happen is sometimes if you stop bad mouthing the boss, you may lose some favor with some of your coworkers.

I want to ask you: what’s more important? Now, if you want to hang, and be mediocre, and just congregate with the water cooler, complain about their job kind of people, then go for it. Your situation won’t get any better.

You at least have a chance if you’re focusing on how can you add value to the company. What kind of suggestion might you offer that could help the company out and how can you make your boss look good? How can you give them ideas that they can steal and claim as their own?

My favorite boss I ever had was this lady named Maggie, very tough but very, very smart. She said, “If you want something done, be willing to give someone else credit for it.” Very powerful phrase. Most people are so hungry for credit and so hungry for recognition that they would never do that. Even if their boss tried to take their idea, they’d say, “It was my idea.” Right? That’s my suggestion around a boss.

Now, over the years we’ve been teaching network marketers over the last seven years. I’ve heard it, not once, but many, many other times where someone is says They so don’t like their upline and they want to prove them wrong. They don’t want to make them any money.

It doesn’t prove anything.

I’m not aware of any compensation plan that if you make lots of money that they take a percentage of your money, and take it away from you, and give it to your upline. What does that mean? It means that whatever money you can make, you should. Whether you like them or not, if they make money, who cares? You’re not spending their money. You don’t have their bills. All you can do is all you can do. Whether you hate your upline or love them to smithereens, what does that have to do with your bills?

All I can tell you is if you want to change your life, you need to stop caring that you’re making your company, your boss, your upline more money or helping them look good. If you ever want to feel better about your situation, stop desiring the downfall of others that you’re connected to whether you like them or not.

Now, what if you REALLY don’t like your PRESIDENT?

I hope you feel that there are a lot of people out there that need to hear this so feel free to share if you agree.

I know a lot of people that were worried when Obama won. The world didn’t come crashing down for them, yes, for most of perhaps all of us our health insurance went up as did taxes but not the end of the world and entrepreneurs have to adapt.

Obviously there is a percentage of people that, for different reasons, hate the fact that Donald Trump is now our president.

I saw a great, great quote on Facebook. It said,

“Hoping for President Trump to fail is like being on the same airplane with everyone else and hoping the pilot crashes.”

I watched all the debates and there is ZERO doubt that Trump said some real bonehead, cringe-worthy things. Saying he is far from perfect would be like saying World War 2 was an unfortunate event, however, there are some things that are being propagated that just aren’t true that even the biggest hater would have to admit are a little peculiar.

Thank god for the age we are living in. Through education and being connected we now know that President Trump (perhaps the first republican ever) stood up for the rights of the gay community AT the republican national convention. (admittedly not the greatest recording but best I could do)

We also now know that there is at least a good percentage chance that a portion of the domestic terrorists that are rioting in cities around America were paid and organized to do so. Maybe no one can prove that one just yet but they sure do have a good sign shop they all work with right?

And we also now know that different media sources have manipulated clips of President Trump to paint him in a hateful light. Apparently that clip is being deleted from Social Media so if it isn’t there just search for DISHONEST ANTI-TRUMP PROPAGANDA EXPOSED.

The Media…is NOT your friend, believe me.

OK, ENOUGH POLITICS, NOW WHAT TO DO

Maybe you hate all three clips I shared above, and that, of course, would be your right, whether you like them or not, President Trump is our president and I would encourage you, even if you absolutely hate his guts and think he is the worst person on the planet, I suggest you do two things:

This a never ending battle. It has nothing to do with politics. It has everything to do with human beings. In your life, you’re typically happy or you’re right. Most people prefer being right. most people walk around everyday unhappy all in the pursuit of being right. If he’s not your choice and not your president or whatever other hashtags are going around, for you to be so hellbent on you being right and saying, “Look, look, I told you he would fail,” will hurt you, will hurt your children, will hurt your family, will hurt your paycheck because if the markets are affected, your paycheck is affected because the people that employ you will make less money and they’ll be unable to give you raises.

Just like my suggestions around having a boss that you may not like, having an upline that you don’t like, you get to work. Get to work. You can make a difference in your situation and you can do that right now. I hope that this message helps you out. I hope it’s not received in some kind of odd, weird, negative stance. I really do want to help you, but I want to help you maybe not care so much about being right but being happy. I know that when you focus on the things you want and like, you can be happier.

I don’t normally bring up politics on this blog and I tried to do as minimal as possible here but also hopefully help the current situations in the United States. I definitely believe if we all take the energy we have put into this election into making the world better, adding value to the business marketplace or simply being more present with our loved ones, this world CAN be more wonderful and I will continue to believe that.

I realize this post may get me some haters and I wrote it knowing that. It may even cost me some business and I understand that too. I hope you see the intention was to help those who are exerting energy in ways that will never help their personal situation.

Regardless of who is president you still:

Love you all, share this message around if you feel it is helpful.

PS: Tired of Trying to Convince Skeptical Friends or just not having enough People to Prospect? What if we taught you how to get people coming to YOU? – Free Three Video Series Shows You How (Click Here)