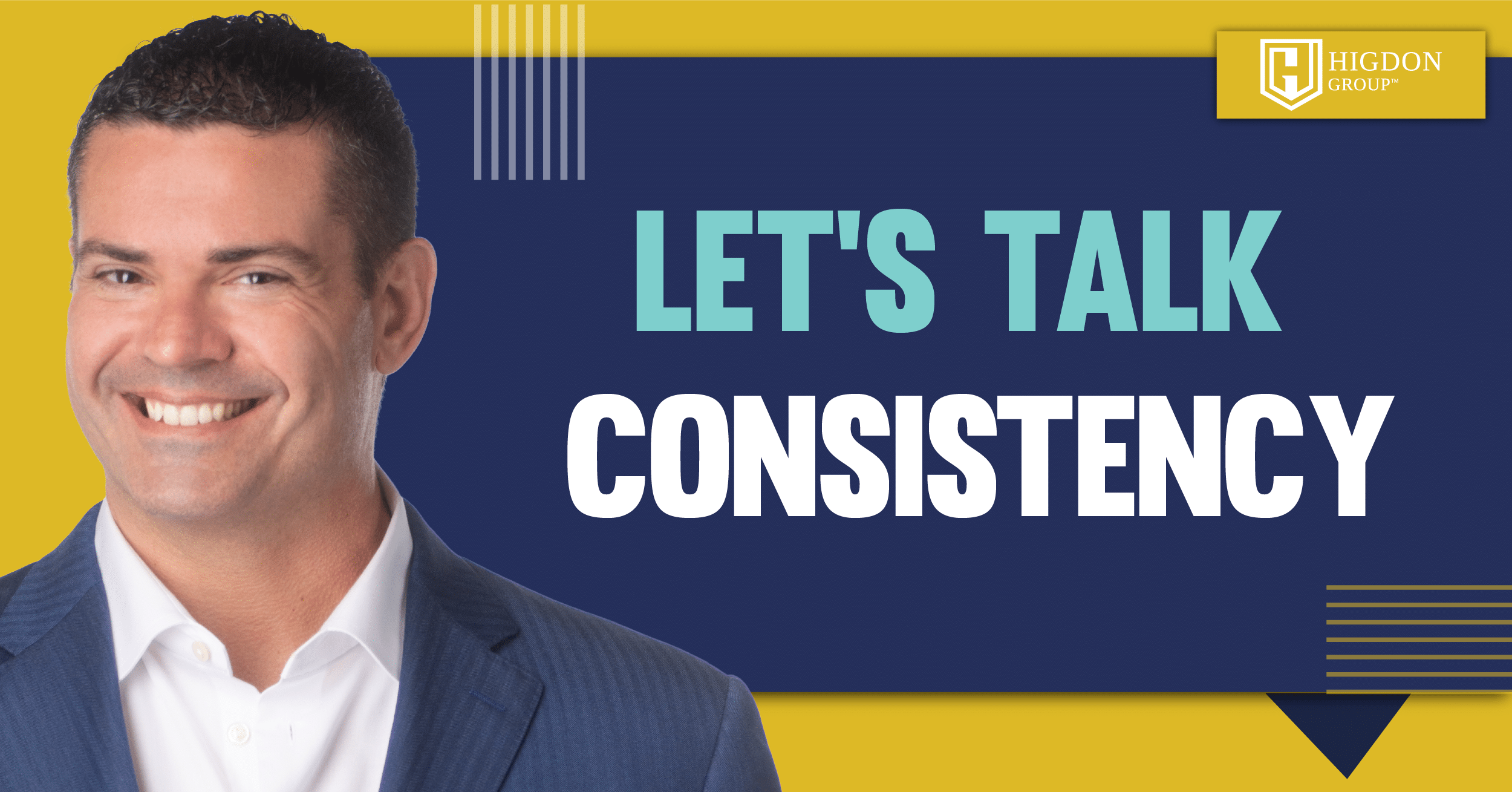 Consistency. I’m just going to shoot you straight with it. I taught, for years, daily routine and daily method of operation and [inaudible] right? I’ve taught that stuff until I’m blue in the face and just hardly any one is consistent. Period. And so what I realized is that it’s a combination of two things that will keep someone consistent. Okay. One isn’t enough. It is a combination. Okay. So one is awareness of who you want to be and the vision of who you want to become and where you want to go. Without that, you’re just not going to stick with it.

Knowing where you’re going, knowing who you want to be, without that you’re just not going to remain consistent, but that’s not enough. The second thing is how you view success. This is the thing that prevents people from being consistent. This is the thing, it’s the thing. So the reason, the number one reason that people aren’t consistent is they draw the wrong conclusion to success. They either think that if they have success, they’re just going to lose it. And that would be really painful. And so not on a conscious level, but on a subconscious level. They’re like, well, if it’s just going to go away anyway, then let’s just not achieve it. And you can always achieve non success by not being consistent. If you’re consistent, you run the risk of succeeding. If you’re consistent, I’ll say that again. If you’re consistent, you will always run the risk of succeeding.

And if you draw the wrong conclusion to success, then guess what you’ll do. You’ll stop being consistent. You’ll do something else. You’ll find a distraction. You’ll find a reason not to you’ll find a problem with your company, right? And so, consistency is something I feel I can speak on. You know, for 11 years I did at least one video a day. And the only reason I stopped, I stopped a month and a half ago, I was in a seven day meditation retreat. I’m just like, you know what, I’m just not going to do it today. So I’ve missed, I think, two days or three days out of 11 years of doing at least one video a day. I’m a lunatic. The reason that people aren’t consistent is they’re drawing the wrong conclusion to success.

That’s a hard pill for people to swallow. So let me give you some examples. Several people that I’ve coached, they witnessed and they observed as a younger person, perhaps as a child, that they had someone in their family that achieved a level of success and then lost it and were ridiculed, were made fun of, felt bad, maybe had went through a divorce, and just was ostracized. If you witnessed that as a young person, and you see someone create success and then lose it all, and you see the ramifications of losing it all, then you might become, in fact, it’s very likely, that you absorb that and think, “oh my God, anyone that becomes really successful loses it.

And so I don’t want to feel that pain. Let me just not succeed.” Because if you don’t succeed, then you don’t lose it. The only way to absolutely ensure you never have a huge fall, is you not having a huge rise. I see this over and over and over. A lot of top earners that I’ve coached, they reach a certain level and they have this upper limit belief that if they go any higher than the fall would be really harmful. So they won’t go any higher.

If you have, if you have been taught by your family, by the media, by politicians, by Hollywood, that having lots of money means you earned it off the efforts of others, and it was greedy, selfish, evil, whatever. Then you’ll never become that which you despise. You’ll never become someone that you deem as evil, bad, greedy, or whatever. And the reality is money is just a magnifier. It makes you more of who you are. If you’re someone that cares about people and you like to make an impact, then I hope you make more money. So you can do that at a bigger level. One of my mentors, passed away a few years ago, Mark Hoverson. He said, “your poverty is serving no one.” Your poverty is serving no one. You being broke isn’t moral, isn’t ethical, doesn’t mean that someone else’s is, you know, they get some of your money because you’re staying broke.

That’s not how that works. You can make an amazing amount of money by providing value and helping others and being of service to others, feel good about what you’re doing, and then you can make a bigger impact. If you want to give more to your favorite charity, then whatever floats your boat, right? That’s not a requirement. I don’t like it being some guilty thing that you have to do, but if it makes you feel good, then do it. Then do it. Okay.

How do you push through this? The first step is to become aware. And as it’s aware of, of two things, so let’s tackle the two things. So the two things that will keep it consistent or prevent you from being consistent is knowing who you want to become, knowing where you want to go. That’s number one, if you don’t know that, then you’re just not going to stay consistent. It makes no sense. Okay.

Number two, knowing what conclusion do you draw to success? If it’s positive, very likely you’ll continue going. If it’s negative, it’s extremely likely that you will stop. That you’ll be distracted. That you’ll join another team, another company, you’ll quit this thing and start this thing. Then you’ll get distracted easily. And by the way, this is a main theme.

Mark Hoverson, he passed away a few years ago. Very, very big inspiration to me. Diane Hoverson responded to you. That’s great.

So without that awareness, we think, “man, every time I joined a company, you know, something always goes wrong.” No, it’s you are in it. And you created that problem at this level because you have an upper limit problem right there. You looking back at your patterns, what are your patterns? How did you feel when that happened and then tracing it back. Now I do coaching sessions that I call, I use something that I created called the shedding protocol. Shedding is elimination of the identity that’s addicted to your activity.

Shedding is eliminating that identity that operates the way that you operate, that is consistent at the level you’re consistent at, and eliminating that addiction to create new possibilities. It’s not awareness of a routine. I’ve taught that for 12 years. It’s not like I just don’t know what to do. Yes, you do. You know what to do. You’re just not doing it because you’re drawing the wrong conclusion to success. And the truth is there isn’t a wrong conclusion to success. You created that based on past observations.