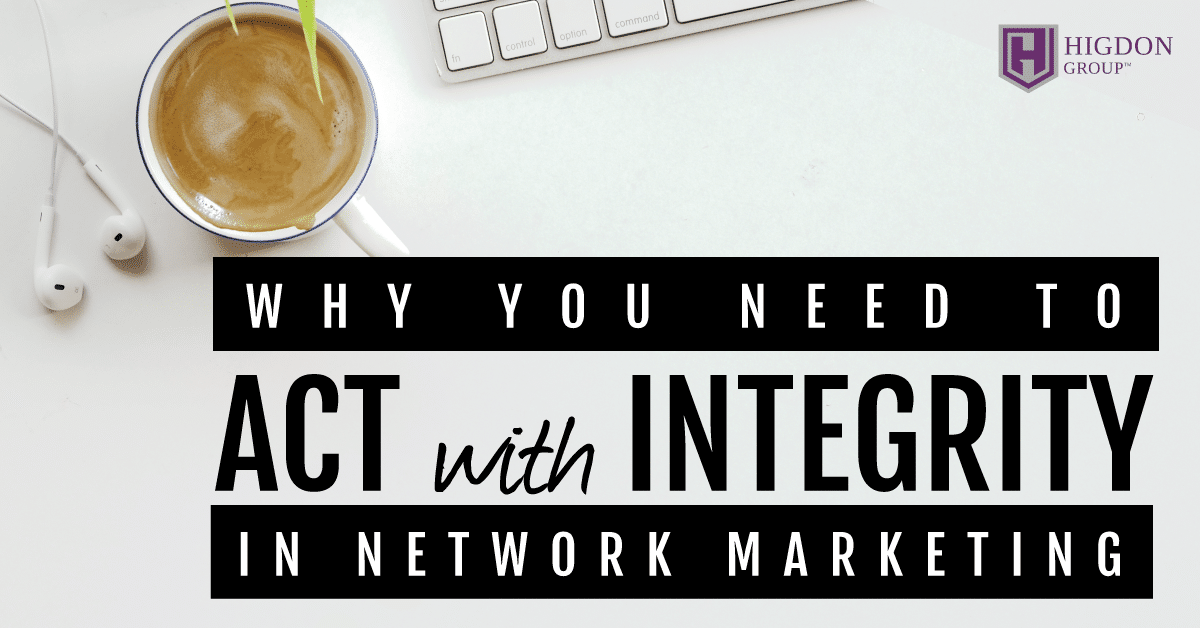 Most network marketers don’t even know that they are not acting with integrity.

Here I share what areas of your business that are crucial to pay attention to if you want to build a large successful team.

Maybe 19 years ago, or 19 companies ago they bought into that. If you don’t do the work, it starts to become just a record player of baloney.

If you don’t believe your word, you will wonder why anyone else would.

You’ll subconsciously ask yourself, “Why would anyone want to work with me? I don’t keep my own word.”

If you question your own integrity, you’re going to struggle to get quality people in. Because you’re not sure you’ll hold up your end of the bargain.

Don’t Do The Work For Your Teammates

Some of you have your end of the bargain as much higher than it needs to be.

I mean, you introduce them to the thing, tell them what to do, point them in the right direction.

It doesn’t mean you move in with them with your sleeping bag.

You invited them into the opportunity, you show them here’s the path.

Someday is such a killer.

The stress of being out of integrity, is worse than you not doing whatever you say you’re going to do.

Someday I gotta quit these things, and all that stress, and that out of integrity is there.

Just smoke the hell out of them, that’s what you’re going to do. If you’re not going to blow them at everybody around you.

Change someday, for I will never.

You think I’m joking, or you think that sounds terrible.

Well yeah, it sounds terrible, but it’s not a protection of your self image.

A lot of the words that people say, is a protection of their self-image.

They Problem With Your WHY

Nine years later, my why is to retire my spouse. The spouse is all tired, and back hurt, right?

I thought you were going to do this nine years ago man, right?

The stress of being out of integrity man, because it infects your entire life, every aspect of it.

You will justify why people don’t join you, because you’re not of your word.

Don’t be so willing to give your word.

If people ever asked me if I was about to recruit them, and they said, “Well hey, will you help me?” They’re right about to sign up, they’re on the dotted line, right?

They’re about to sign up, about to press enter on the credit card. “Hey, will you help me?”

I would stop and say, “What do you mean by that?”

I don’t know what they mean, because they may mean that I’m going to move in with them.

They may mean “Well, I’m looking for someone that’s going to do this, this, this, and this, follow up with all my leads, call me every day. Fly to my city, help me build my team.”

I would much rather have upfront expectations met, and tell them, “Here’s how it goes.” I remember, and this is regardless of promise or potential.

Here’s the story of how I recruited my first big producer.

I remember he saw one of my videos somewhere, reaches out to me, and he’s like, “Hey, I’m thinking about joining this company. Why should I join you?”

“Here’s the deal, here’s what it looks like, and that’s just what I did.”

No hype. An absence of, “Oh, I’ll come wash your car, I’ll put people underneath you. I’ll buy your way in,” because there’s none of that crap.

You’re going to have a tough time keeping up with me, I’m just letting you know.

Then I would go do the work, and I did have people out recruit me, which was great. I had three or four people that recruited more than I did, but they had to work.

People should have to work out recruit you. It shouldn’t be just a given, I see so many people that they bring in a producer, and it’s like, “Sweet, I’m on easy street, I’ve got my producer.”

That’s NOT a powerful energy for that producer.

You don’t have to baby them usually. But, you better be bringing some energy to the conversation.

You better be showing up, and having them excited to be around you. The only way you only do that with is with production.

If you enjoyed this post aboutHow to Reset After Taking a Network Marketing Break, retweet and comment please