The 2 Rules of Following Up in Network Marketing 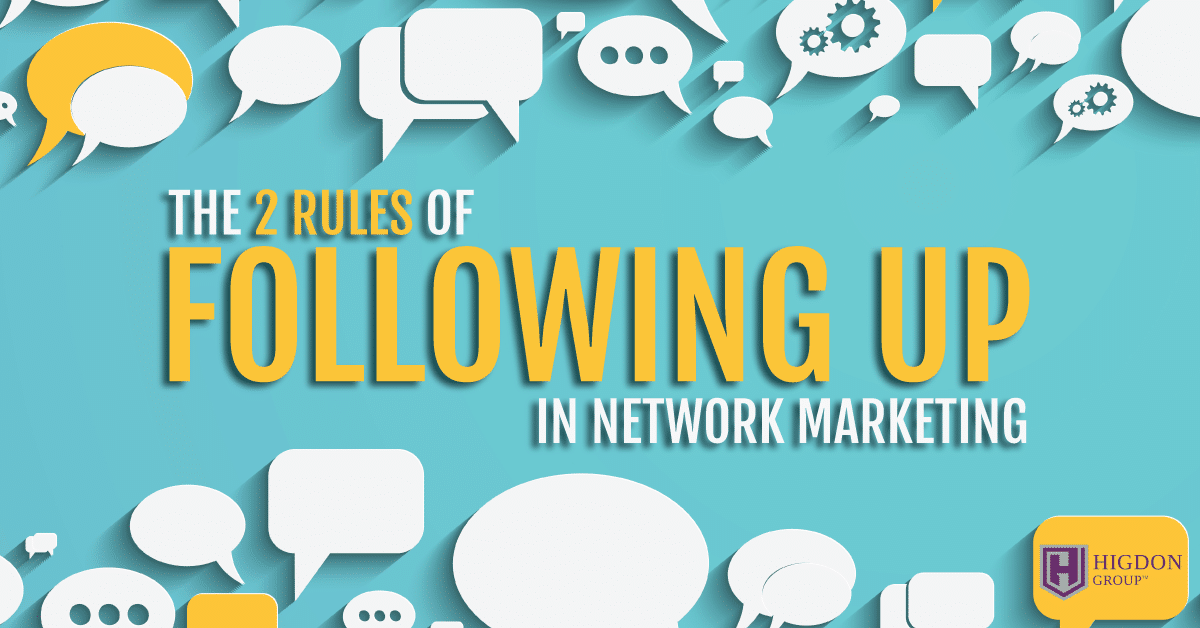 Prospects not returning your messages? How long do you follow up with a prospect for?

Here I share the 2 rules of following up and the exact script that gets most prospects to call me back.

The 2 Rules of Following Up in Network Marketing

There’s 2 Rules of Following Up That I Use:

Let me explain the difference.

Let’s say that I prospect someone and I say, “Hey. I’m doing this thing and I don’t know if you’re open to it at all, but I’d love to share with you more information on how I’m making some extra money on the side.” Just an example. If you have a favorite line you like, use that.

And they say, “Yeah. Let’s do this. I’m totally open to checking it out.”

All right, “Well, hey, how soon can you watch this video?”

“Well, I can watch the video right around two o’clock today.”

They don’t answer, right? Shocking, isn’t it? What? There are people out there that don’t honor their commitments? That don’t have integrity around time and meeting people? That sounds nuts.

So, I’m going to leave a voicemail or I’m going to send a message, “Hey, you ready to talk? Hey, we were supposed to chat at 2:30. Just checking up on you, seeing how you’re doing, if you’re still free to meet? Give me a call real quick.”

So 24 hours later, I’m going to send them a message or I’m going to call them, “Hey, we were supposed to chat yesterday. Didn’t hear from you. I hope you’re okay. Let me know if this is something that you want to still talk about.”

Or I type a message, “Hey. Sent you a message yesterday. I hope you’re doing okay. Let me know if this is still something you want to talk about.”

If I haven’t heard from them two days after that call, I’m going to call them.

I’m going to call them, and I’m going say, “Hey. I haven’t heard from you. Left you a couple messages. Hey listen, I’m going to assume that you don’t want to talk about it, and that’s totally cool, but hey listen. I’m going to mark you off the list. I won’t be following up with you. I won’t be giving you a call anymore. But I wish you the very best.”

That message, or that call, is the one that has the highest chance of response.

People hate being marked off a list, even if they don’t want something. Now, nothing is 100%. So will there be people not respond to that third message? Sure. But, it’s your highest chance of getting a response.

I’m going to drop that message on them. I’m going to leave that voicemail on them. Very high chance they reach out to me.

Now, does that mean I stop? Well, I’m going to stop calling.

Now, if they’re really rude to me, then fine. I’ll mark them off the list.

Would you just bring anyone home to momma? Or would you be a little bit more selective? I’m selective. I don’t want them around my people. If they’re really rude, nasty, cursing me out, or anything like that, but I’m going to tell them, “Hey, I’m going to mark you off the list.”

And, I have multiple lists.

And so, I follow up until they pass away. If I read their obituary, then I mark them off, because that doesn’t make any sense.

I’m going to follow up three times with someone who scheduled a time. And then after this, if they ignore all of those things, we’re going to roll into my standard follow up which is, I follow up until they pass away.

If you enjoyed this post about The 2 Rules of Following Up in Network Marketing, retweet and comment please