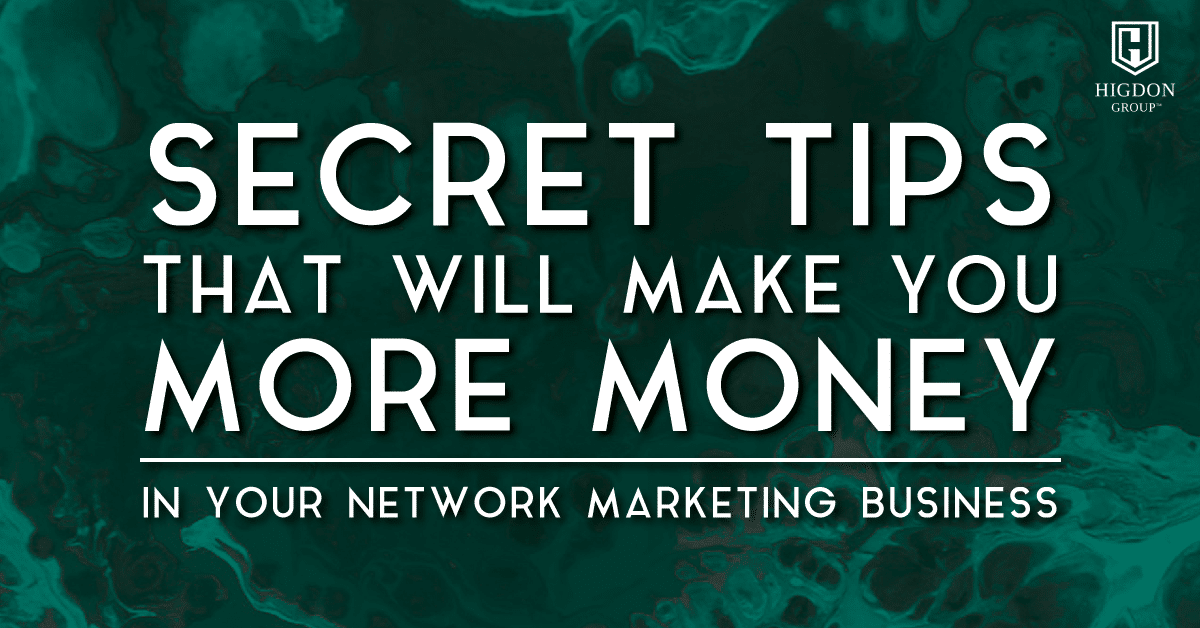 Are you not making as much money as you’d like in your network marketing business?

Here are my 2 secret tips that will help those who want to be at a higher income level.

Let’s talk a little bit about how to make more money in your network marketing in your home-based business.

So, if you feel like, “Man, I’m working way up here man. I’m working hard and I’m not making much money.”

I know over my lifetime I’ve certainly felt that way a few times. So, here’s my advice.

One of our Top Earner Clients, my man Curran, he is in a company where I believe to get started in his home-based business it is a minimum of a $2,000 investment.

He said, “Bro, that’s a high investment. It’s a high ticket. How do I get this thing into momentum?”

And I said, “Well, same thing as everything else. It’s just a number game. It’s you get in front of more people. And it’s you going out there and stop thinking of it as high ticket. Stop thinking of it as a big investment because I mean I don’t know the stats but probably every single day someone buys a franchise for $30,000, $50,000, or $60,000. Or they buy a Domino’s franchise, which at one point was $250,000 start-up cost and they told you that it was a ten-year return on investment.”

They told you, “Hey, you’re giving us a quarter-million dollars, you should make that back in profits by year ten.” And people do it every day.

So, stop using your money filter on everybody else.

I remember being at Nordstrom’s buying this $100 shirt.

And I asked, “Can I get this fitted?”

And the person was like, “Yeah but it’s an additional cost.”

15 bucks for a shirt to fit me perfectly, that I’m paying over 100 bucks for… kind of makes sense.

It’s not that large of investment there for me to have a shirt that I don’t look like I’m parachuting in.

So, don’t project your money thoughts and the filter that you have about money.

What To Do If You Are Broke

I’ve been there. I’ve been dead broke.

I mean, I’ve been dead broke twice in my life.

There were two times in my life where I paid every bill late.

Years and years ago, when we first had my boys, we were wick cheesing it, man. We would go with the little deals and you could get the 16 oz block of cheese.

So, don’t project your money thoughts on other people.

I just wanna help you out that the reason someone asks you, “Well, how much is it to do your business.”

The reason they ask is to rule it out.

It’s not that they have a piggyback behind em.

“Well, how much is it because I have recently saved a large amount of money and I’d like to know if I need to save more or if we’re ready to do this?”

They’re not asking for that reason. They’re asking to rule it out.

See If They’re Open, Give Them An Out

See if they’re open, give them an out. (Which is what we teach inside of Rank Makers)

When you’re willing to give an out, they’re like, “Hm, that’s a little different.”

See, most network marketers that are untrained, they would say:

And so step one, if you wanna make more money, stop projecting your money filter on other people.

Not everyone around you is dead broke even if you are. And, I would say that that’s one of the biggest tips I can tell you about how to make more money in any business.

If you enjoyed this post about Secret Tips That Will Make You More Money In Your Network Marketing Business, retweet and comment, please