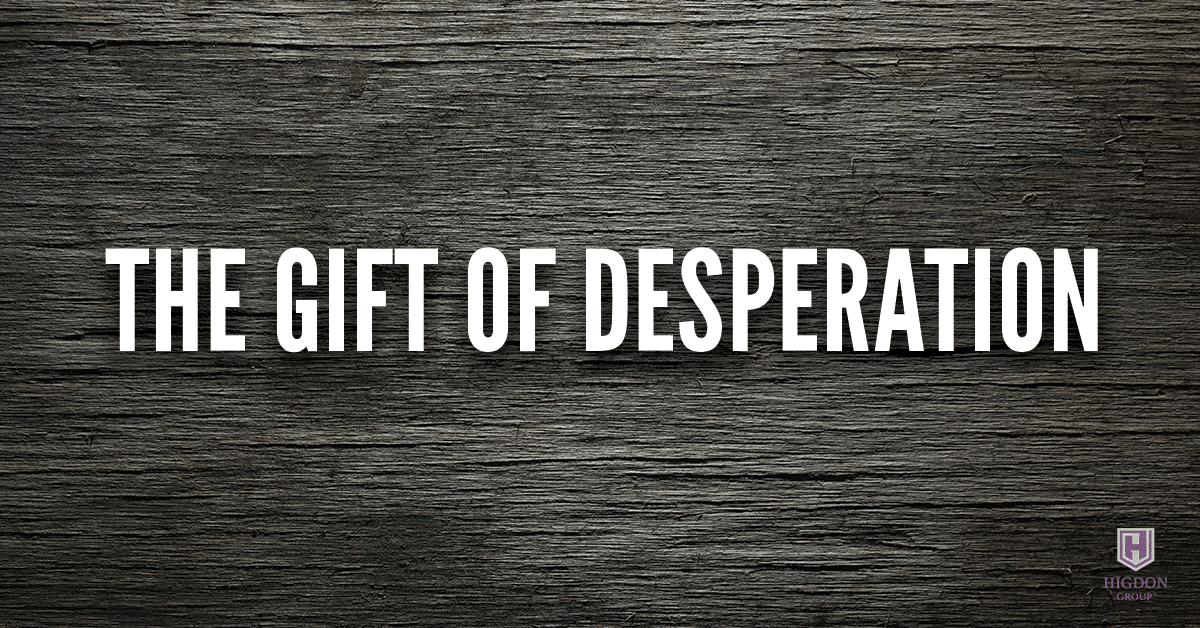 If you are struggling to make it in network marketing, this will help.

Here I share how to embrace the gift of desperation and build a network marketing legacy.

There was a phrase said at the ANMP conference called the gift of desperation.

It’s easy for some people to look back and see the desperation as a gift.

Of course, when it’s happening it’s a little bit tougher. But I’m gonna make a suggestion for you… that is don’t cheat the gift of desperation.

Those of you who attended the ANMP event or watched on live stream, you heard about Larry Thompson’s story when he was in El Paso.

Larry tells it way better than I do, but I’m gonna give you a little bit of the highlights.

So, he’s only 90 days in the business, they ship him out to El Paso, where in his network marketing company there were zero reps in the state of Texas. Zero. This was 1968, I believe.

He goes out to Texas, where there is zero reps. It’s him. It’s a one man band. One man army. They tell him, “For every 10 people you approach, you should get one to a meeting.”

So he goes out there, he’s a one man band. He was staying in a hotel room, renting out a conference room, and running meetings.

That means he’s talked to over 500 people face to face and NO sign ups.

I’m not talking about rinky dink Facebook messages. No, “Hey, are you open to my product service opportunity?” I’m talking about face to face.

He went out to talk to human beings. He was out there getting the business, because that’s all he could do. And he couldn’t take a credit card, he couldn’t phone anybody. He’s out there inviting people to a presentation.

At this point he should have at least five, right?

Because they told him, they said, “Hey, for every 10 you get to a presentation, you should get one to two people.”

So, he should at this point have five to 10 people on his team. But he’s got zero.

Because you know one of the things that he really was terrified of is he was terrified of going back to California with his tail between his legs saying he couldn’t make it happen, and having to go back and get that job.

So over 50 people had come to the presentation. Larry’s about to pack it up. He’s about to pack it up and head back with his tail between his legs to California, crying himself to sleep every single night listening to Bobby Depew, Jim Rohn records and ready to go back to that construction job that he had boldly quit maybe a little too early.

But he was creating that gift of desperation story to impact people all over the world.

He was ready to cash it in. And the 53rd person he invited to a meeting signed up.

Number 53 signed up. Kept him in the game, started helping him at meetings.

Had prospected over 500 people face to face.

Have you prospected 500 people face to face? I’m not talking about 500 Facebook messages where you get keyboard fatigue, carpal tunnel. Right?

Number 53 signs up. First rep. Gave him some hope. Kept him in the game.

You could absolutely argue, that there’s a chain of events that if he didn’t stay in until number 53, we might not have our profession.

Don’t Rob Yourself Of The Gift Of Desperation

So, don’t rob yourself of the gift of desperation.

“You know guys, I was really struggling, and you know what, I just went to a bunch of people and borrowed money, and that really helped me keep afloat.”

Imagine you’re all enthralled listening to this Larry story, and you’re like, “Whoa, man.” And then all of a sudden Larry comes to where he was really struggling and then he goes, “And then I realized that I had a rich uncle, and I phoned up my uncle and he floated me some money, and boy that really helped me stay in the game, then I was able to make it happen.”

See, you’re creating your story. The gift of desperation is your legacy.

Where To Start Your Story

I’ll tell you where it starts. It starts in gratitude.

It starts with that.

Network Marketing Is The Lowest Overhead

Because let me tell you. If you were super desperate, dead broke, try running a gas station. Try running other businesses, where the overhead is way more. Try running a restaurant when you’re dead broke, and you gotta get the food. You gotta pay the staff. You gotta cover the commercial square footage of the lease. Right? Try it. Give it a shot.

That doesn’t mean what we do is easy. It doesn’t mean if you’re in the midst of the gift of desperation that it’s easy. I’m not saying that. I’m just saying it’s probably not possible in other professions.

Start to step into gratitude. What are you grateful for?

You gotta start thinking like that. Stop trying to cheapen the gift of desperation and ruin your story that could be a legend story for 50 years.

If you enjoyed this post about Network Marketing Success: The Gift of Desperation, retweet and comment please