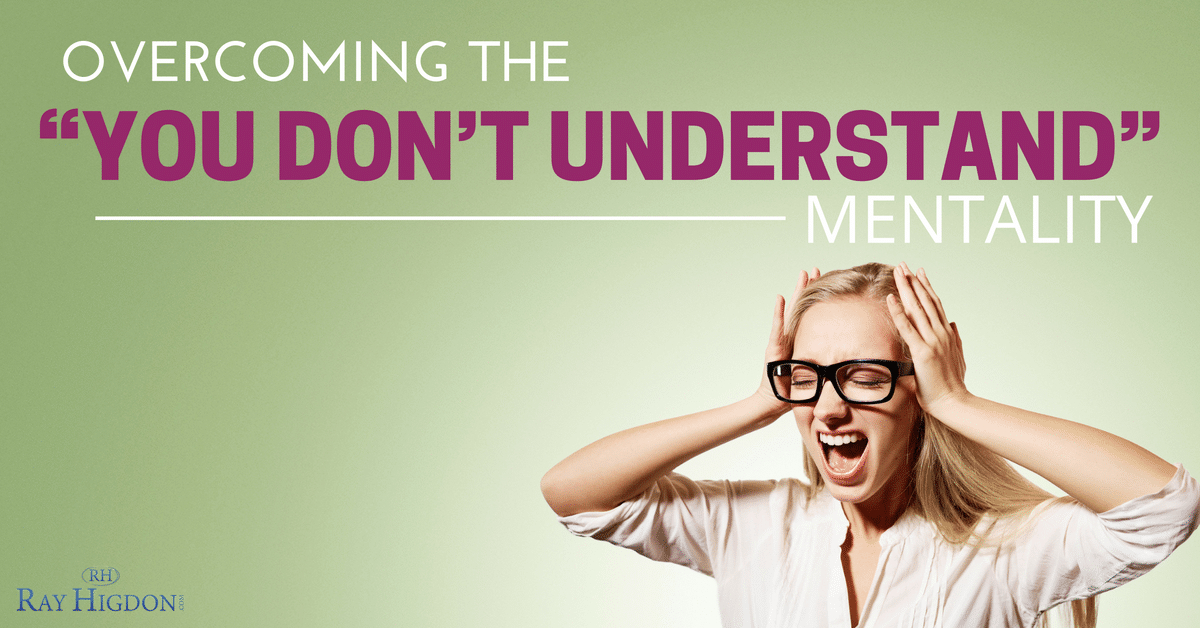 One mentality holds so many people back from GREAT Success. It’s the “You Don’t Understand” mentality.

Here are some tips on MLM Leadership for breaking this cycle of justification with your team and making way for MASSIVE success.

Most of the people that I know that have had massive success have had incredible stories of overcoming struggles.

I know that I’ve had some different struggles. I didn’t have the greatest childhood, went through some abuse there, parents were split when I was young, been dead broke twice, went through foreclosure, etc. When I hear someone else’s story and I realize how much of a wuss I am. I’m like, holy cow. Just hearing some of the stories out there of people that don’t have a roof over their head. I read once that 27,000 people a day die from not having clean water. There are people out there that have it worse than us!

Overcoming The “You Don’t Understand” Mentality

Anytime we ever share give advice like Here’s How To Do This or Here’s What To Say, there’s always people that come with their immediate rebuttal of, “You Don’t Understand.” They use a justification.

When those who haven’t created success, at least in their minds, when they’re faced with contradicting stories they quickly aim to find the reason WHY instead of HOW. People that are constantly justifying, whatever you justify you get to keep. Whatever you defend you get to keep.

When you’re teaching such critical training, like mindset, like how to overcome your obstacles, etc. You’ll have people that say, “I’ve heard this before.”

You know my answer? If I love them … (key ingredient here). If I LOVE them, and someone says to me, “Oh, I’ve heard this before.” My response is, “Your results show otherwise.” That’s if I love them.

You Know What You Produce

You know what you’ve been able to produce. That’s what you know. This past year I worked with a mentor who built a 250 million a year company, 2,000 employees. I don’t know how to do that yet. I haven’t done it. Now, I could read a book, How to Create a 250 Million a Year Company. I could read a book and I would know what that book said.

You also want to be careful of your justification. You justifying where you are keeps you where you are. We don’t want you to stay where you are. If I love you, I’m going to tell you how you need to think differently if you actually want to change your life.

One thing that Oprah Winfrey says, she says, “Life is not a dress rehearsal.”

That’s something that if you keep going around like a broken record saying, “You don’t understand my story, Ray, because I’m left handed,” or, “I wear an eye patch,” or, “I was attacked by a shark.” I’m telling you, there’s someone with a much tougher story that has created success despite. They’ve created a success anyway despite that tough story and so can you.

Below is a special portion of The Fast Track to Six Figures Webinar with Mark Hoverson. Mark and I share the Leadership Skills needed for overcoming the “You Don’t Understand” mentality.

More Resources For You You:

How to Develop your Vision Mini-Course

How to Change your Life

What did you think of that? Was that good stuff? Let me know what you think in the comments below. Feel free to share with your teammates.

If you enjoyed this post about MLM Leadership: Overcoming The “You Don’t Understand” Mentality retweet and comment please