How To Respond To Negative Comments On Your Videos 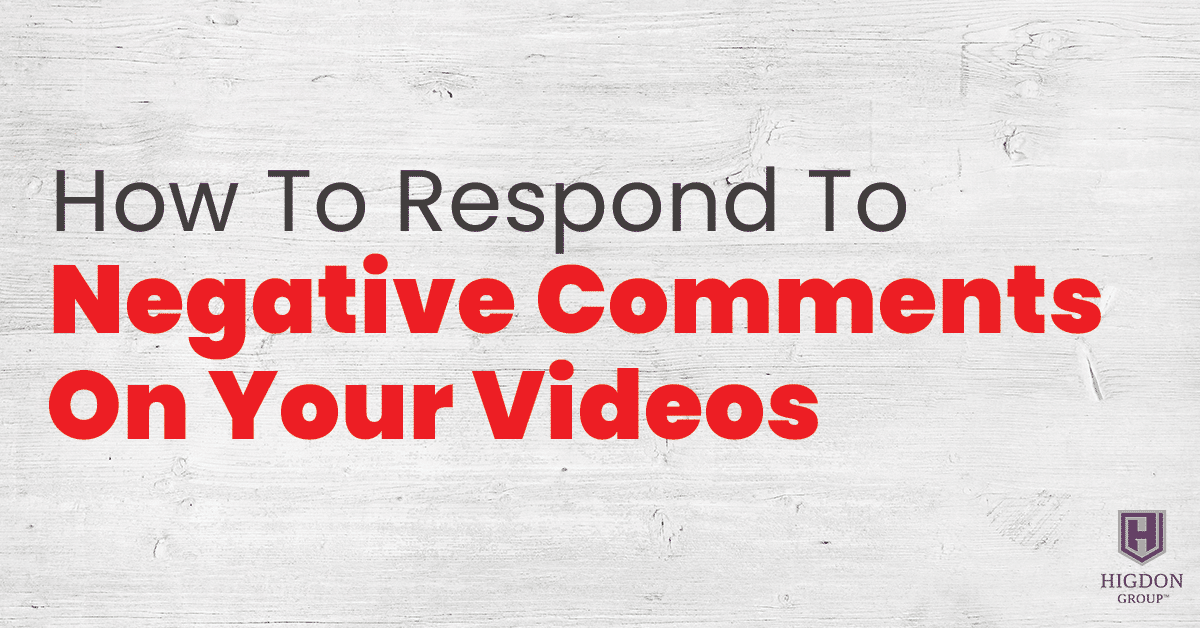 Have you got some negative comments when you do lives?

Here’s exactly how to respond postured to those trolls.

How To Respond To Negative Comments On Your Videos

One, always remember that if someone takes the time to sit on a Facebook Live of yours and post a negative comment then they’re having a pretty crappy life.

I think the biggest thing for you to take away is know that the comment isn’t about you, it’s about them.

It’s their either insecurity and something in their life. It’s their hatred, their despisement of something you represent that maybe they wish that they did.

I know that when I changed what my goals were, when I started being my own boss, starting my own business, and doing those kind of things, I noticed some people had some negativity toward that.

We’ve done one to two videos a day for nine years now, and so believe me I’ve had thousands. I will tell you that I think my worst ones have come from YouTube, but I definitely have had some on Facebook Live.

Now, there is a limit, okay. I had someone on YouTube that made some very, very nasty comments about my wife. That it just ain’t happening. I’m blocking them. I’m not conversing with them. And, I’m not saying anything to them, okay.

There are some limits.

If someone is just like, I’ve had people that got on my email list and then for whatever reason they email me and say, “Oh, you’re ripping people off,” or whatever they say.

My response to them isn’t, “Hey, go screw you.” I always respond and say, “Hey, I’m sorry you feel that way, and I’m sorry if you’re having a bad day. And, I hope that things get better for you.”

That’s how I typically respond to a nasty comment.

Now, what’s funny about that is I would say about 50% of the time, maybe more, they actually respond with an apology and they say, “I’m sorry, you know I’m having a bad day and I just took it out on you. I apologize.”

Again, there’s a limit. If they’re saying something really derogatory and really nasty then I’m gonna delete it. I’m gonna block them. I don’t want to deal with them.

Don’t Stoop To Their Level

I also don’t stoop to their level, because keep in mind just the fact that you’re doing Facebook Lives means you’re an example, like you’re an inspiration to people, because a lot of people are scared, they’re scardy bears to do Facebook Live.

So, if someone is nasty to me and drops negative, nasty comment then I don’t want to, “I’ll show them.” Because what am I teaching my audience?

I’m teaching my audience that that’s how they should roll, that should be their energy, and I don’t want that energy.

You know what because I know if someone takes the time to watch a Facebook Live and give me a negative comment then their life is not going so well.

Guess what, I don’t go around watching videos and stuff because I’m so excited to drop a negative comment. I got better shit to do.

People that have better things to do they just don’t do that, and so it’s the people that don’t have the greatest life, that aren’t having a good time, that are having a bad day, that maybe life has kicked them in the shins and they’re trying to take it out on someone that they deem is doing better than them, or bolder than them, or something like that.

I would say do your best to try to be an example, and try to say, “Hey, I’m sorry you feel that way. I’m sorry maybe you’re having a bad day or something. And, I hope that things get better for you.”

Some People Won’t Like You Know Matter What You Do

If you enjoyed this post about How To Respond To Negative Comments On Your Videos, retweet and comment please