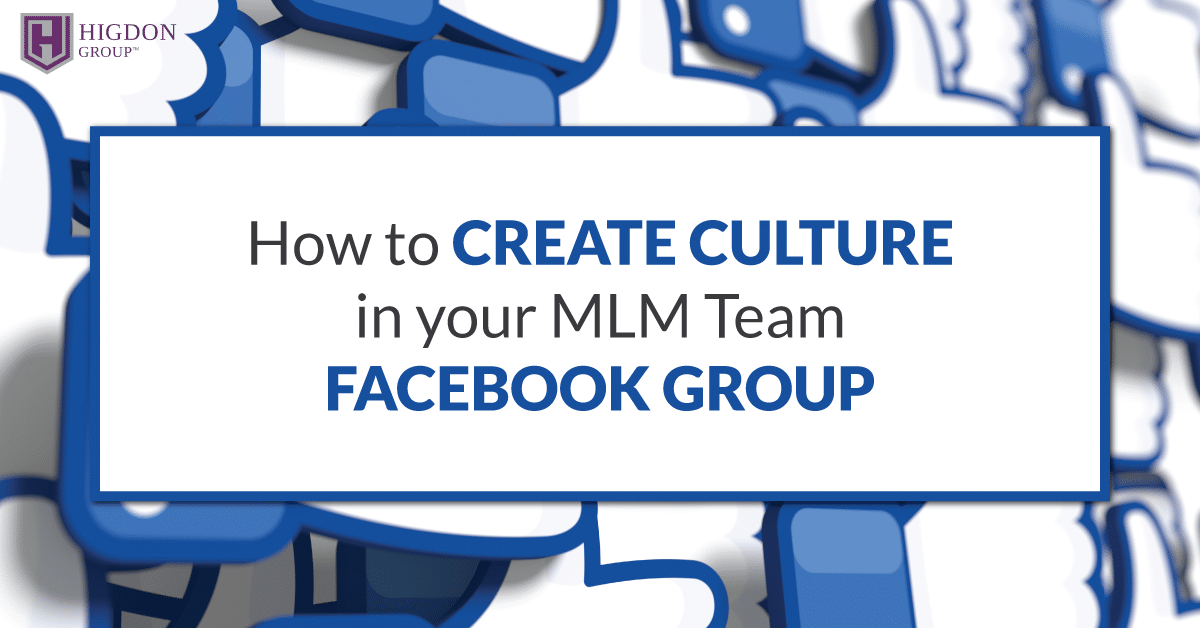 Want to increase engagement and results from your mlm team facebook group?

Here’s my suggestions for anyone who has a team facebook group page or is thinking about starting one.

How do you bring culture to your team when your not the one running the team page?

You can bring culture.

Now, there’s two things with this…

Number one, I do think that some people start a team group too soon.

Now, that’s something I can tell you. For your upline to tell you, most people will see that as a restriction of their freedom. “Well, who are you to tell me I’m not right?”

I’m here to tell you.

I can tell you, from my point of view, that too many people start a team group too soon.

Whatever you do, your people are going to think they need to do too.

If you have a team of five, and you’re like, “Team group.”

Well, guess what happens when your people get a team of five? “Team group!”

That’s what they do.

So, I do think too many people start a team group too soon.

Second point is, keep in mind culture isn’t just a group. A group is a part of culture.

How people are made to FEEL is the culture.

As you bring people onboard, then you can make them feel welcome.

You can explain to them that the Facebook group is a resource for them.

But you just from time to time, send them a little note.

I’ll tell you one thing that I do… (This may or may not apply to you depending on how you’re acquiring some of your teammates).

I would say maybe about once a month, I’ll actually scroll through, find old pictures, and text them to the people that are in them.

And I do this as just like a little, “Hey, I’m thinking about you. Hey, hope you’re doing well.”

Just a little thoughtful kind of thing that I do.

Now, that isn’t a solution for every person in your team, I’m not saying that. But thinking that way is.

Pay attention to when is their birthday, send them a little voice message. “Hey, I’m so grateful that you’re a customer of ours, and you’re just amazing, really appreciate you.”

Don’t Be ALL Business In Your Group

The team group that is not a great culture is the one that’s all business.

You’re probably not going to influence the runners of the group. If they’re around my trainings, then maybe they’ll be impacted and affected.

And so they just don’t get it. They don’t understand culture.

The group is a part of culture. It’s not the culture.

Now, if you’re doing a lot of social media recruiting and things like that, then you’re going to have a lot of people rely on that group for culture. And so culture would be acknowledging of others, not trying to force engagement.

You know, I see a lot of leaders that, they have leaders in their group and they’re like, “Come on, guys, you know, participate in this group.”

Well, that’s NOT their personality.

And so that, “Ray, go do small talk out there.” I’d be like, “Ah, I don’t know what to do, I’m not that great at small talk. I’m not the chit-chatter. That’s just not how I roll. You want to talk to me about marketing or sales or business or something like that, or Marvel comics, then all right, we can talk about that.”

Too many people are trying to get people to do things against their personality.

Well, in your group, there is a classification of people called cheerleaders. They just love to cheer people on. They love to, “Whoo, way to go, girl!” Right? They love that stuff. You need to don them, right? You need to knight them, and say, “Hey, you have my permission to cheer more people on in here.”

They may not be your highest producing leader, but they’re a blue personality type, they like to party, they like to have fun, they like to acknowledge people.  Don them. You know, knight them to do some cool stuff inside of the group.

Those would be some of my suggestions.

Don’t Set Expectations Too High When Starting Out

If you have already started a group, and you feel it’s too soon, just don’t expect too much.

Your goal should be to grow the group, not get a lot of engagement in the group, because it’s probably just not going to happen.

I’m like, what the hell’s that have to with your money? Go build the group. Go get 10X more people in there.

You know, if you got five in there, get 50 in there, and you go do the work. Then you got a much better chance of engagement.

Engagement isn’t the end result or goal, engagement should be … It just makes sense for them to, because you’re so cool in there.

How We Do Culture

Every week we do badges, we do prizes, we send out anywhere from $200 – $1,000 of prizes every single week. We do stuff that nobody else does. That’s why it makes it so easy to stand out, because so many people do so little.

And so we try to do things that stand out and make people feel special, make people feel wanted. If we see that someone fairly even close to us is in the hospital or something, we send flowers. We have a position called the growth and gratitude director. That’s all she does. That’s her job. Send out gifts. Send out love.

Love People At Every Rank

What can you do in your world? Doesn’t have to cost money. Doesn’t have to be a gift. It can be just a little voicemail. “Hey, just thinking about you, I hear you’re going into surgery. I hope that things go well for you and you’ll heal fast. And I’m here if you need to talk to me.”

Okay. That little note of, “I care about you.” Regardless of where they are on the comp plan…

See, some leaders would only do that to another leader. Pay attention to your group.

One thing that I heard John Maxwell say, which I really resonated with, is he said, “As soon as you stop loving the people that you’re serving, stop serving the people you’ve fallen out of love with.”

It’s basically saying, take yourself out of leadership unless you love your people and who you’re serving. There’s power in that.

Does the pastor love every person in the community? Or does the pastor only like the people that drop the most money in the little collection bin? Loves them all. So should you.

Regardless of their level of desire or level of result.