How to Believe in Yourself in Network Marketing 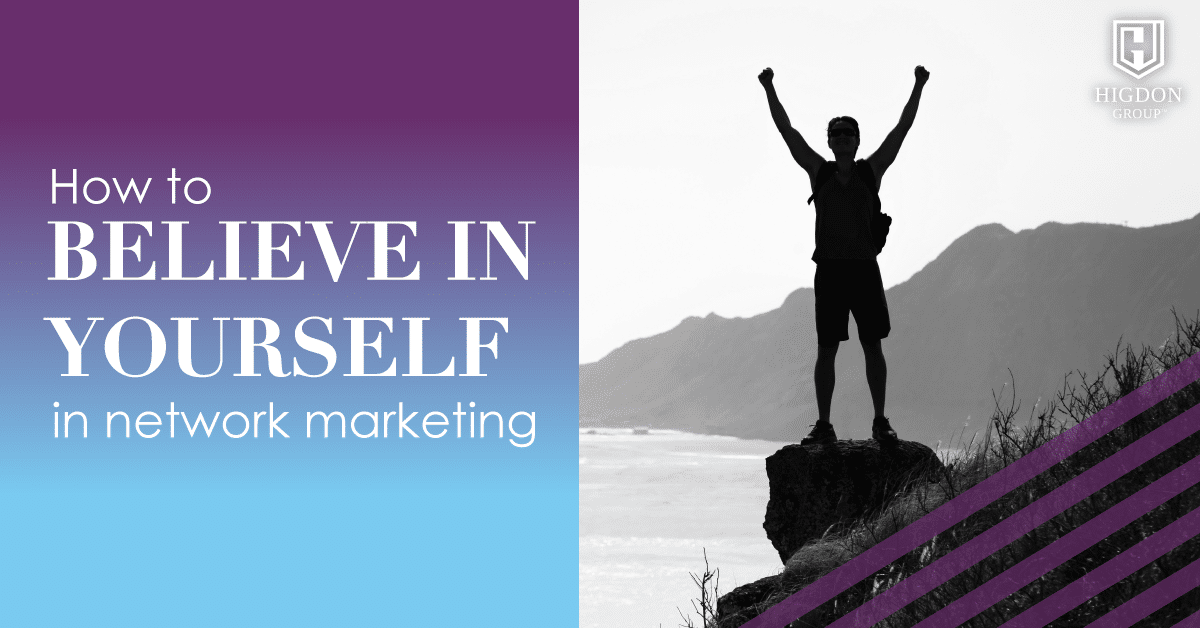 Do you need more belief in yourself?

Here I share a very powerful training on exactly how to believe in yourself and become successful in any goal you set.

How to Believe in Yourself in Network Marketing

“I gotta have belief.”

They hinge everything on, once I have belief, then I will do the work, right?

If you’re serious, about building a business …

You ready for this?

If you’re serious about building a business, stop requiring belief.

If you're serious about building a business, stop requiring belief.Tweet it

Isn’t that strange? Isn’t that just weird to say? Here’s why.

We’re meditating a little. We’re building our belief. We’re writing affirmations. We’re listening to Yanni and trances and all that stuff, right? We build our belief, right? It’s built now. It’s built. It’s up here. “I believe I can achieve. I can make it happen. Om.”

Well, at some point, you come out of your trance, your hypnotic state and you know what you look at?

Here’s what you look at. You ready for this? You look at your results.

Do we go back into trance? Do we start Sanskrit again? Do we burn more incense right? Is the CBD oil behind the ears? What is it that we do now?

Change your habits. Do the work, when you don’t believe.

If we require belief, before we do the work. That means we will never get results. Okay?

At the end of the day, longterm belief, rests on what are my results? You see the conundrum we’re in. Right?

Gotta build belief, OM. I can’t do the work until be a believe. OM. I did my om’s and now look at my results. They suck.

You gotta stop requiring belief, before you do the work.

Has anyone in your organization made a dime, without you? The answer is YES.

I don’t mean in your team.

When you stop requiring belief, and you just do the work, look around.

Go to your company convention and say, “Huh. That person over there made money without me. I didn’t even help him. They’re not even in my organization. That lady over there, she got a result from a product, I didn’t even introduce her to it. Huh. Wow. Weird. Huh.”

Stop being the bottleneck here.

Now, there’s only one last thing left, that needs to work. That’s you.

One day, dark clouds are outside.

Show Up & Figure It Out

In real estate, I read my first book on, my first entrepreneur book.

I showed up and figured it out.

I showed up and did the work.

Learn in the streets, not in your head. Go do the work.

If you do the work, you will get results.

If you do the work, you will get results.Tweet it

Now, this varies by person. It varies. I can’t tell you, when you’re gonna get results. I don’t know. There are people like Eric Newman, who went through our training. He’d been in network marketing for 15 years, I believe. Had his first thousand dollar month after going through our training. What about D. Smith, who’s in our Rank Makers group. Five years in the industry, got into Rank Makers, got her first customer.

I don’t know when you’ll get the results. I don’t know, but I know you’ll never get them if you require belief before you do the work. Do the work.

If you want results, which is ultimately what you’re gonna rely on.

It’s hard to have belief, if you don’t have any results.

At the end of the day, you’re gonna say, “What are my results?” It’s gotta indicate your level of believe. When they’re nothing, your belief is gonna suck.

There you go. I hope that was helpful.

If you enjoyed this post about How to Believe in Yourself in Network Marketing, retweet and comment please