How Much Rapport Do You Have To Build? 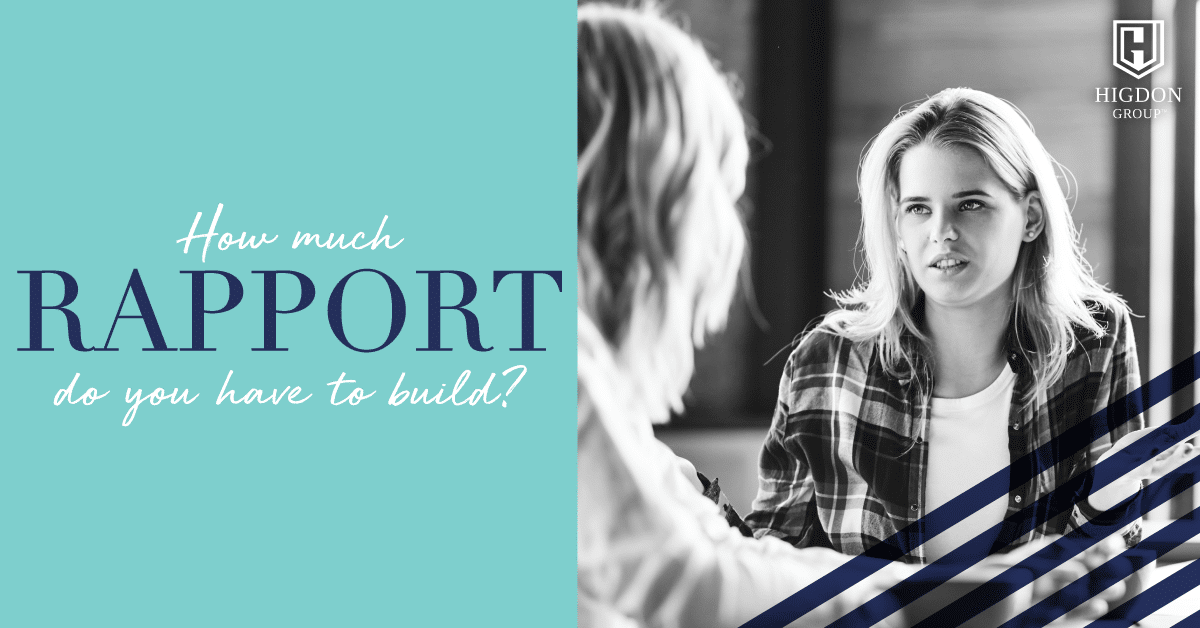 Ever wonder if building rapport is the best approach to closing a prospect?

Today I’m talking all about rapport, spam, and finding a happy medium to achieve results.

How Much Rapport Do You Have To Build?

One of our Rank Makers sent me some screenshots and said, “Hey, man, just so you know, there’s some people in Rank Makers that bash the approach of getting to the point when prospecting. And some of them say that you have to build rapport instead. You’ve got to like their pictures. You’ve got to send them apple pies. You’ve to do all kinds of different things.”

But we teach to get to the point. To not worry too much about rapport. So I want to share those distinctions with you below.

So first of all, let’s talk about spam. What is spam as it relates to our profession?

We see spam as assuming the position of the person without any evidence. For example, if you go to someone and say, “Hey, I think you would totally kill it in my company. You should join my team,” and you don’t have any evidence that they’re looking to join a team, that’s spam.

If a guy walks up to a girl at the hotel bar and says, “Hey, I have a room upstairs,” that’s spam. He’s assuming that she’s ready to party.

But unfortunately, spam doesn’t usually work. It may work sometimes, but usually not.

So what wouldn’t be spam? Well, if the guy walked up to the girl at the hotel bar and says, “Hey, I’m just curious. Are you here with anyone? Can I buy you a drink?” That’s not spam because it’s not assuming.

So step one of understanding training is you got to get yourself out of your network marketing mind.

Building Rapport vs. Getting to the Point

Now – what do I say to the people who are firm believers in rapport and building that relationship prior to getting to the point. Those people are lacking the intelligence of understanding duplication. Building rapport is very hard to duplicate.

[mashtweet tweet=”Why do I get to the point right away? Because I seek production. That’s what I care about. Getting my product and service in the hands of more people.” text=”” username=”rayhigdon”]

On the other hand, if you are getting results with rapport building, keep doing it. Keep rocking it. Keep making it happen, but just understand you are special. You have a gift that not everyone has. Statistically, building rapport does not prove to be successfully, so if it’s working for you keep going.

So if you prefer, based on you getting results, that building rapport if your thing, then build rapport.

When it comes to building rapport, some people are building for six months before getting to the point.

Why do I get to the point right away? Because I seek production. That’s what I care about. Getting my product and service in the hands of more people. Getting people in your organization that aren’t influencers, aren’t experts, aren’t credible, to do something. That’s what I’m committed to, so the people that argue about rapport, I don’t get it.

When people send a bunch of rapport building b.s. messages, I don’t want to hear them. Get to the point.

People don’t know how to communicate with human beings, so we make it simple. That’s what we do. We prospect and get to the point. You are costing your team money. That single mom in your team that’s struggling paycheck to paycheck, but you’re telling them, “No, no. You got to have six messages at least. You got to like at least 30 viewed posts before you do that. You got to send them an apple pie.” So all that bullshit you’re piling on top of her is costing her money.

[mashtweet tweet=”When people send a bunch of rapport building b.s. messages, I don’t want to hear them. Get to the point.” text=”” username=”rayhigdon”]

Teach her a different way. Be open to it. They don’t have to do it your way. Have them do it a little bit different way. If they want to talk to people at car lots, have them talk to people at car lots. If they want to walk around people in the mall, have them walk around people at the mall. If they want to go door to door, screw it. Who cares? Go door to door. Speak to humans, ask if they’re open to your product, service or opportunity, and allow your team to do that. Why are you so controlling? Stop worrying about building rapport.

What Others Are Saying About this Rapport Training: 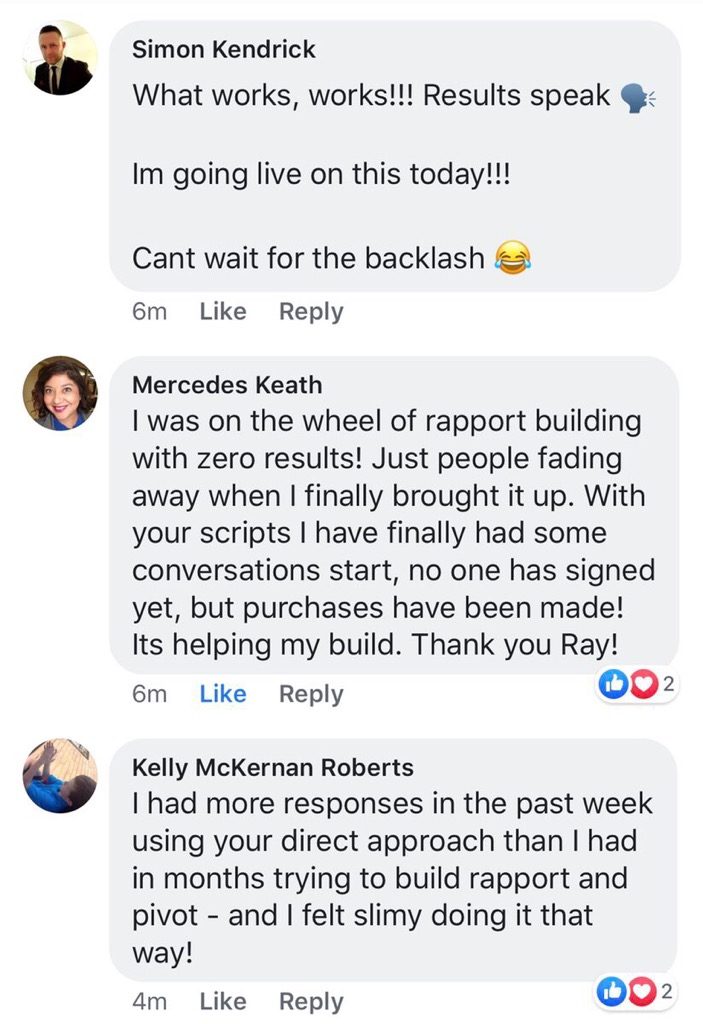 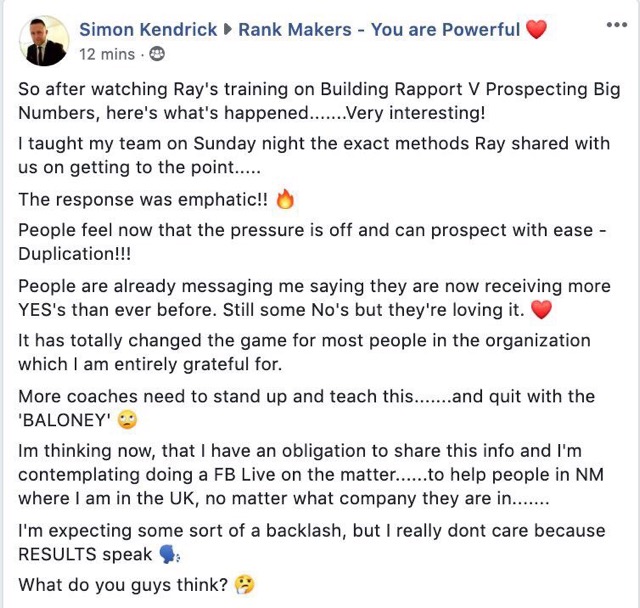 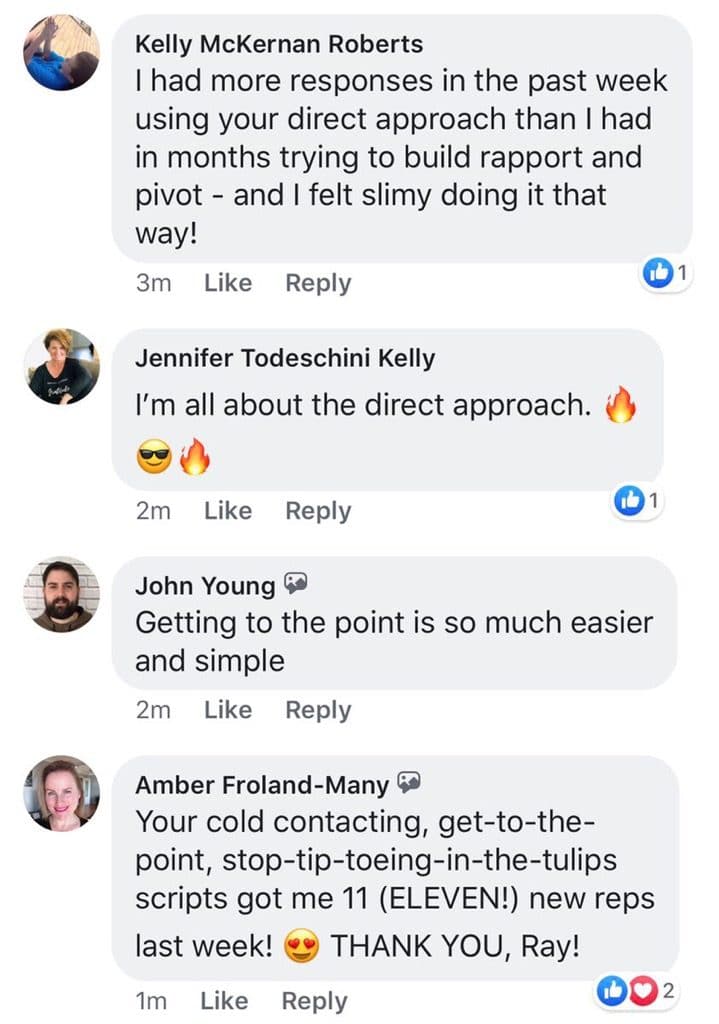