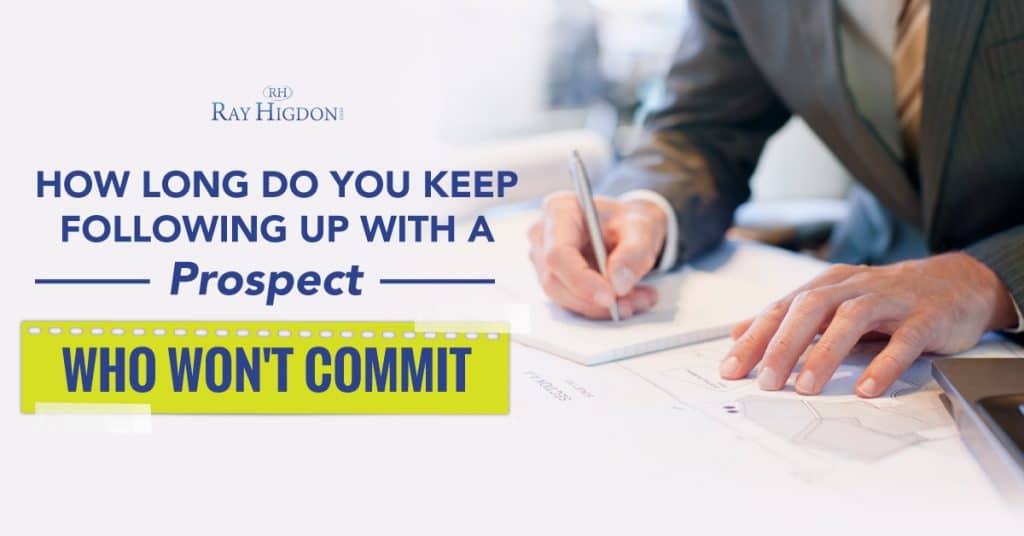 How long do you keep Following Up with a Prospect Who Won’t Commit?

Here I share my thoughts on how long is TOO LONG to be following up with your prospects. And, EXACTLY what to focus on to get more prospects to take action and finally commit.

Following Up With A Prospect Who Won’t Commit

How long do you wait before you eventually give up on someone who tells you they’re interested, but then never signs up?

It happens all the time. Why is it? Well, we are a society where, unfortunately, integrity is not a main priority. People just kind of willy-nilly throw stuff out of their mouth, with no dictation that that’s their actual word.

A couple weeks ago when Jess and I went to the network marketing event. And, I bumped into a whole bunch of people. A couple different people that were like, “Ray, I’m ready to hire you as my coach, man. I want you to help me with my branding, and I want you help me with this and that.”

I have someone follow up with them Monday. And all of a sudden it’s like, “Oh, I’m real busy.”

People don’t have power in their word. At some point in history and in society, the word integrity just became a marketing word, but with no actual iron to it. No teeth to it.

People will tell you they’re going to join with no actual intention. It’s just the way it is.

We are a society that is lacking integrity right now. That’s just the deal. Will it get better? I don’t know. Who knows? Simply doing what you say you’re going to do, you will blow the minds of all around you.

If you ever want to reach your power, the power that’s inside of you that’s pumping through your veins, the greatness that is inside the DNA, the gray matter in your spine, if you really want to tap into that, then you HONOR your word. Don’t say stuff. If you don’t plan on doing something, don’t say it.

I’m always aware, like if someone’s saying, “Hey, Ray, do you mind if you do this and this?” If I don’t plan on doing it, I’ll just say, “Hey, I’m unable to do that, and here’s why.” I’ll say it. I might have an uncomfortable conversation. But I’m not going to weaken my word by saying, “Yeah, man. I’ll do it.” Then backing out later. You need to honor your word.

Check Up From The Neck Up

If you have A LOT of people that are telling you they’re going to do something and they never do it, I would do a checkup from the neck up.

I would do a checkup from the neck up and ask myself, “Do I do that sometimes?”

I would ask myself that. And sometimes those are tough conversations. I’ve had things in my life that they happen, and I kind of say, “Hmm. Is that my fault? Did I do something there? Did I say something the wrong way? Set the wrong expectations?” That’s number one.

You want more people to honor their word, honor your word.

Now, in your scenario, that may have nothing to do with it. It may just be a person that just doesn’t have integrity, and that’s just how they roll.

If someone tells me, “Hey, I’m going to join.” And I’m following up with them, and they’re not joining. I position myself. I want you to put yourself in a little bit different position.

What do I mean? In the video below I don’t hold back. I tell you how it is. Here I share how I would position myself and what I would focus on to get more prospects to actually commit.

There ya go. We need to keep our word. We need to start acting like professionals. Let me know what you think in the comments below. Feel free to share this with your teammates.

Ready to take action? Here are some more resources for you:

If you enjoyed this post about How Long Do You Keep Following Up With A Prospect Who Won’t Commit, retweet and comment please