How Can We Generate Leads Through Social Media? 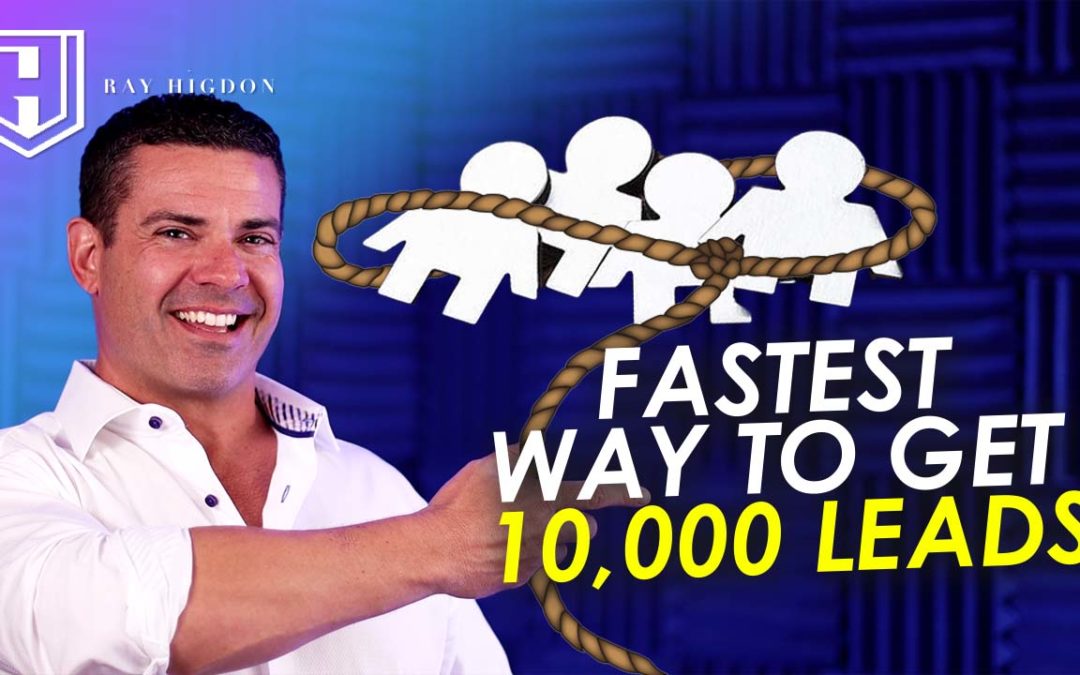 There are billions of people across all the different social media platforms that have the potential to be a customer or recruit for your business! So how can we generate leads through social media? Watch this video to find out what really works for lead generation online!

Are You READY to Accelerate Your Speed To Success? Here’s How…

So, maybe you’re wondering how can we generate leads through social media?

Let me show you how with these very simple steps.

So my name is Ray Higdon and I have built an INC 5000 company from home mainly using social media. We’ve generated well over 400,000 leads, generated tens of millions of dollars in revenue and I will share with you how you can generate more leads through social media.

First I’m going to cover something that is so, so important. Literally every person I’ve ever talked to that wanted to generate more leads but they weren’t, they needed this mindset tweak on how to think about lead generation, we’re going to cover that.

So the big concept that you really need to get if you want to improve your lead generation is really how to think about lead generation. So, the people that seem to struggle with lead generation, they have one thing on their mind and that is the thing they sell.

So, they sell a widget or a gadget or a shake mix or skin care or whatever it is. that they sell and they’re like well Ray, I want to sell more of this thing and lead generation involves a little bit different ways of thinking than just what the thing is that you sell.

So if you want to generate more leads, understand that most people aren’t ready to buy your product. Even if you have a successful promotion where a lot of people buy, know that there’s a lot of people that saw that didn’t buy.

If you’re trying to attract parents and you have this thing for sale, instead of focusing on the thing for sale, focus on parenting, parenting education. Maybe you start interviewing teachers or you start interviewing authors who wrote books on raising kids and parenting like you know, this is a quote that I heard from Jason Fryde, one of the co-founders of Base Camp. He said out teach your competition.

He didn’t say out push, out sell, out work, he said out teach. So if you create more educational content than your competitor, you’re going to generate more leads, I guarantee you, that’s just the way that it works.

And so instead of always focus on what promotion to run or what buy one get one or what you know special deal, ask yourself what could the type of person that might want to buy my thing, what would they really love to know?

What would really help them in their life, you know what would make their life easier? You know what education can I do that would attract them over to me and then I have a conversation about the thing you have for sale.

So here are some simple concepts that work for any business. One, take people on the journey and this works in any business. It’s really amazing I remember I was speaking at a high school in Fort Myers Florida and I was part of this entrepreneur ring, business owner ring whatever where we would go to different high schools and we would just you know share our experiences.

A lot of times the high schoolers had never been exposed to a business owner or had any kind of conversations with an entrepreneur or a business owner and so it was a lot of fun. It was really cool.

I got some really cool experiences from that and some cool stories years later and so I remember one time there was this guy and he was a plumber and I’m like okay, he owns a plumbing business like that’s a business, cool and I just asked him just you know I just happened to ask him, I’m very glad, I did.

I said well where do you get most of your business? You know his answer? YouTube.

The majority of his business came from YouTube. He said yeah man, you know just every job that I go on you know, I just figured why not film me fixing this thing and you know put it out there and maybe someone will see it. And so literally every shower that he fixed, every toilet that he fixed, every sink that he fixed he just put on YouTube.

Hey here, I’m here and they got a bunch of hair or whatever he said, right and I didn’t watch the videos but it was him taking people on the journey of the business and just documenting that and putting that out there and was there education in there?

Yeah, you know he would share you know today I’m using this you know roto-rooter or whatever he’s using, right, I don’t know what he used but he would share the tactics he was using, he would share like had he seen that before and people could literally watch his videos and either decide man, I want to hire this guy, I need his help or you know sometimes they might be able to walk through what he’s doing and figure out their actual problem. So, taking people on your journey.

Now, what if you are a coach, right? Well one of my mentors, he said this to me one day and it really made sense, he goes you know a lot of coaches, we never see them coach. They just do a video, they’re talking head, they expew their information but we never actually see them coach somebody. And so I’m like you know what?

You’re right and so I started doing what I call laser coaching where I bring on an individual, I don’t know exactly what they’re going to say and I coach them live.

And so it’s a live video and they bring up and I’m like okay, you know what is it? What’s your problem? Where are you at? Where are you hoping to go? What’s holding you back and I literally coach them live so that’s part of taking people on your journey.

If you’re trying to generate leads through social media, this is something we talk about all the time. We give you specific strategies for TikTok, for Instagram, for Facebook et cetera and I know it’ll help you so click that subscribe button, click that bell button so you get notified of all our new content because sometimes we’re learning something new that is working like crazy for us and we want to share it with you.

So, what is the fastest way to get in front of more people?

The short answer, TikTok. TikTok when it first came out, I was not an early adopter.

I kind of saw and I’m like you know I’m not going to do that and it was until I saw so many people go over there and create results that had never created results, people that had been trying on Facebook for years went over there and created amazing success, it’s actually very inspiring and it’s because they have a different algorithm that gets your stuff in front of more people whether they know you or not, that’s the big game changer.

Now how did I stumble upon this? So I had a buddy of mine who told me that he’s seen a lot of people getting success over there, I’m like okay, all right, whatever and then he told me he goes no, no. You don’t understand, Ray.

These are people that have struggled on Facebook for years, they went over there and created success, I’m like oh, that’s interesting because my job as a trainer is to make your life easier.

So if I learn of a way that could do that, it’s my responsibility to learn it and so I hop on TikTok and I start doing videos right and you know I do a mix of some goofy, some educational, some are trending or whatever and you know it’s going okay. I’m getting a few hundred views, not a big deal and so one guy, this guy and I still remember him, Lenny Phoenix.

So Lenny Phoenix comments on one of my videos and he says you’re giving advice but you don’t even get that many views. No hate, Merry Christmas, that’s his exact comment. I still remember it and and I just thought that was awesome and a good opportunity.

So TikTok has this ability for you to video reply to a comment.

Now I didn’t do a clap back, I didn’t do some you… I didn’t do anything like that but I did want to address it and so I said you know what, Lenny? You’re right.

I’ve created success on other platforms, I’ve generated tens of millions of dollars elsewhere on the internet but you’re right, I am new to TikTok but here’s the question.

Can we only learn from gurus now like they have to be you know pedigreed certified you know accredited like, I mean can’t someone have good advice and not be exactly the guru?

I think so and so that was you know the gist of my response and so I post it and again I have like 300 followers, not a big following, I go and it was a Saturday, I go chase my kids around and we’re just messing around goofing off and I come back and I look on TikTok and it says it has 20,000 views.

I mean I’ve been marketing on Facebook for a decade and most months we spend anywhere from 50 to $100,000 in ads on Facebook.

I don’t get videos get 20,000 views without ads. Now I’ve had it happen a few times but not very often and again this is from a decade of marketing 300,000 fans on our fan page.

And again I only have 300 followers, that’s when it dawned on me. This is a different algorithm, this doesn’t just show it to people that know you already, it shows it to anybody that it thinks will enjoy that content.

And so that’s when I knew that this was such a valid platform and it is the suggested platform for you to grow on if you’re going to pick just one, I would do TikTok.

Now technically if you do TikTok, you might as well copy it over to Instagram reels and Facebook reels that are coming up soon but it is something like nothing I’ve ever seen before, very powerful, highly recommend it.

Are You READY to Accelerate Your Speed To Success? Here’s How…