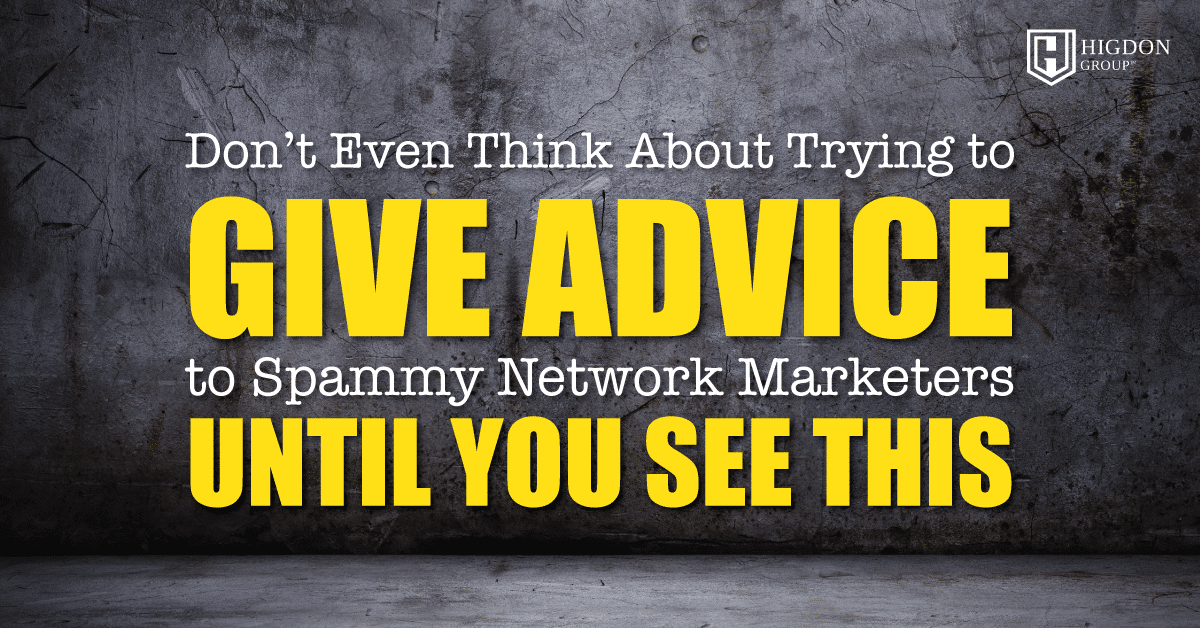 Do you know someone who is spamming the heck out of the internet?

If you want to give them some advice but are not sure how they will take it, this will help.

Here I share exactly how to give advice to spammy network marketers.

What do you do if you have a friend that’s in a different network marketing company AND has a very high chance of being defensive?

Here’s what I would do.

First, I would Ask A Question

Now, what’s awesome about this is people that aren’t coachable they’ll say, “Yeah, I’m coachable,” whether they’re coachable or not.

Most people if you ask them, “Hey, are you coachable?”

It will decrease their amount of defensiveness.

So, if I say, “Hey, dude. I’m seeing your social media stuff and it’s kind of spammy man. You might get better results if you do something else, if you do it a different way.”

“What the hell do you know, man. This is how my company teaches it. My uplines says …”

Very likely that they get defensive.

Example Of What To Say:

Same person, but you say:

“Well, I saw your thing and there might be better ways.”

So, it’s much less likely that they get defensive.

Because they’ll wanna get defensive and they’ll be like, “Gotta be coachable.”

Now, if they say no. No they aren’t coachable.

You saved yourself some time.

You don’t gotta do anything. Don’t worry about it.

But, if they say yes, then say,  “Hey, if you’re getting massive results from what you’re doing on social media, definitely keep doing it.”

They’re not. I guarantee you.

So, one of the books that I coauthored is Go for No for Network Marketing. The entire book is to get people past the fear of rejection.

The whole purpose is to eliminate your resistance to a no.

When I got serious about network marketing, I went for 20 nos a day and just tallied them up every single day. In month 7, I became the number one income earner of that company.

And so, there was a guy that was arguing with one of our students saying, “You should never go for a no. You should always go for yes. That’s a total mistake going for no.”

That was his opinion and I got tagged on it.

My response was, “Hey, everyone’s got an opinion. It’s a numbers game. If this guy is getting massive results with his approach then he should certainly keep doing it.”

Do you think he’s getting massive results? Probably not.

If someone’s getting massive results from doing something, keep doing that.

There’s a lot of people that need to stop thinking about what they know and start looking at their results.

What results are you starting to get?

If you’re not getting the kind of results you want, be coachable, learn some things. Learn some new ways to think and show up.

If you enjoyed this post about Don’t Even Think About Trying To Give Advice To Spammy Network Markers Until You See This, retweet and comment please